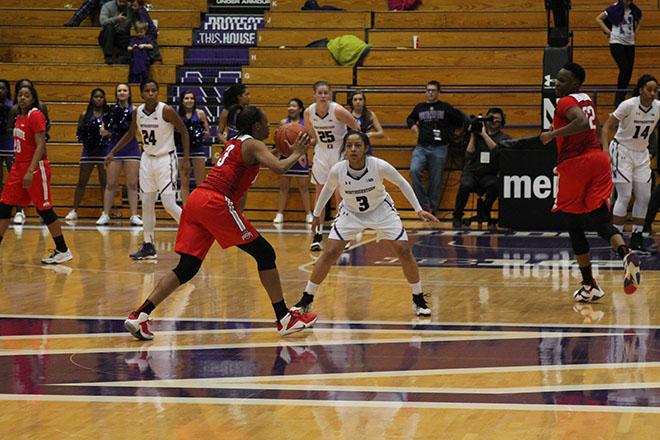 Not even 50 percent team shooting and a 27 point, 3-for-4 three-point shooting performance from junior forward Nia Coffey could save the 'Cats on a night when UM's senior guard Rachel Banham went off for 32 at a 6-for-10 three point shooting clip. Minnesota shot 46.7 percent from the field, but went a scalding 11-for-21 from beyond the arc.

In the first quarter, NU jumped out to a 17-12 lead and looked to be cruising on the back of a strong rebounding performance from Pallas Kunaiyi-Akpanah. Minnesota was too hot to contain for too long, and the Gophers surged back to grab a 26-23 lead through one quarter of play. Kunaiyi-Akpanah, almost quietly, registered a 13-point, 12-rebound double-double. the second in the freshman forward's career.

Minnesota opened things up a bit in the second quarter, leading by as many as 13 and hitting the 50-point mark with two minutes remaining in the half. NU was able to limit the damage as the half came to a close, but still went to the locker room trailing 52-41.

The third quarter was nothing short of ridiculous. Just two minutes after halftime, the Gophers had grabbed a 59-43 lead and were seemingly on the verge of putting the 'Cats away. But then Coffey, playing with three fouls throughout the second half, took matters into her own hands. The junior scored a whopping 19 points in the third quarter alone, including 10 in the span of about a minute and a half of game time near the end of the quarter.

Coffey's resurgence sparked a 23-7 extended NU run that knotted the 'Cats and Gophers at 66 with two minutes left in the third. NU soon grabbed its first lead since the first quarter, 71-69, but a late third quarter scoring spree sent the teams to the fourth deadlocked at 74.

The fast paced scoring ground to a bit of a halt in the fourth quarter, but the intensity certainly did not. After a back and forth first few minutes of the fourth quarter, NU grabbed an 83-80 lead on a Christen Inman three-pointer, and held onto that lead until the Gophers buried back to back jumpers to regain an 84-83 advantage that they never lost. UM's Carlie Wagner sunk a wild bank shot to make it 88-85 with 1:19 left, and the Gophers made all but one of their free throws down the stretch to fend off a strong last ditch effort from NU.

Northwestern has now gone 3-6 since starting the season 10-0, and needs to turn things around quickly to maintain their spot in at-large consideration for the NCAA Tournament. Their next chance to do so will come Sunday when the Indiana Hoosiers visit Welsh-Ryan Arena for a 4 p.m. game.