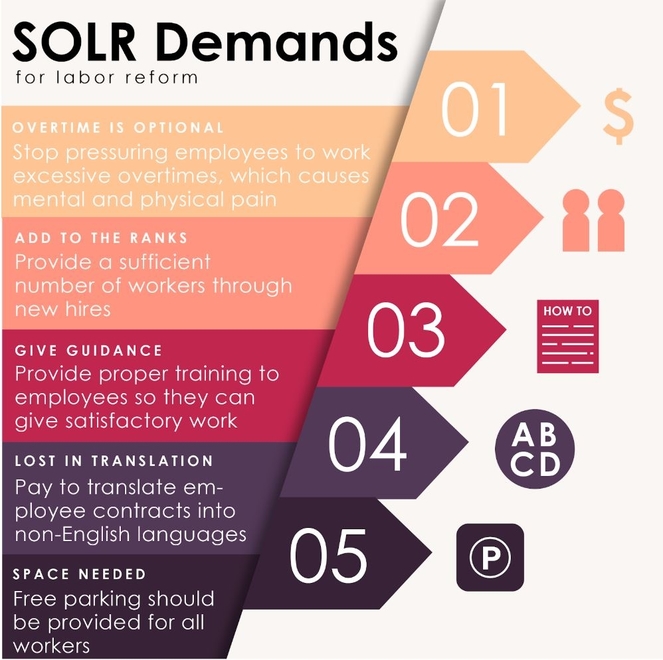 Now, months later, Students Organizing for Labor Rights (SOLR), a group advocating on behalf of service workers, raised over $2,000 last Wednesday for the transportation of service workers on one of the coldest days in the Chicago area on record. This successful fundraising campaign gave SOLR significantly more attention, which it used to raise awareness about Compass’s unfair treatment of these service workers.

With this new spotlight, SOLR circulated a petition, listing specific demands for improvements to the treatment and working conditions of Northwestern’s service workers. These demands included providing a sufficient amount of workers rather than overworking employees, treating employees with respect, holding perpetrators of verbal abuse or racist harassment accountable and paying employees properly and on time. These demands expose the emotional and mental distress, financial anxiety and physical pain that service workers have attested to, which we, as a student body, have either been largely ignorant of or have simply ignored but cannot allow to continue.

This petition, which has already garnered hundreds of signatures, came only after months of attempting to negotiate with Compass and Northwestern administration.

“We have exhausted all avenues for discussion-based resolutions to these numerous and significant problems,” the petition written by SOLR states. “We now submit these demands to Northwestern University to spur them to take responsibility for the labor practices conducted by a corporation that they chose to contract with.”

Whether we were ignorant of the unfair treatment of the Northwestern service workers before, we now have no excuse to allow this to happen. As tuition-paying students whose money supports the operations of Northwestern, we are just as guilty of upholding these systems of oppression against service workers as the university is. If the demands aren’t met, this would be inexcusable, and if we remain complicit in Northwestern’s and Compass’s disrespect of labor workers, we are supporting them in their clear violation of basic human rights.

This problem is even larger than just Northwestern. Universities have a huge impact in the economic, social and political infrastructures in our country. By allowing these violations to occur, the university is contributing to the history of oppression of service workers and perpetuating the treatment of these workers as subhumans.

We must not let this cycle continue, and as students at this private university, we have power and privileges that others don’t. We have the choice to use these powers to fight against injustices or perpetuate them ourselves. I can’t, in good conscience, be complicit to these inhumane practices, and neither can any other student who believes in basic human rights and fair labor practices. We cannot rest nor remain inactive until we see it through that all members of this community are treated with the respect and dignity that they deserve.