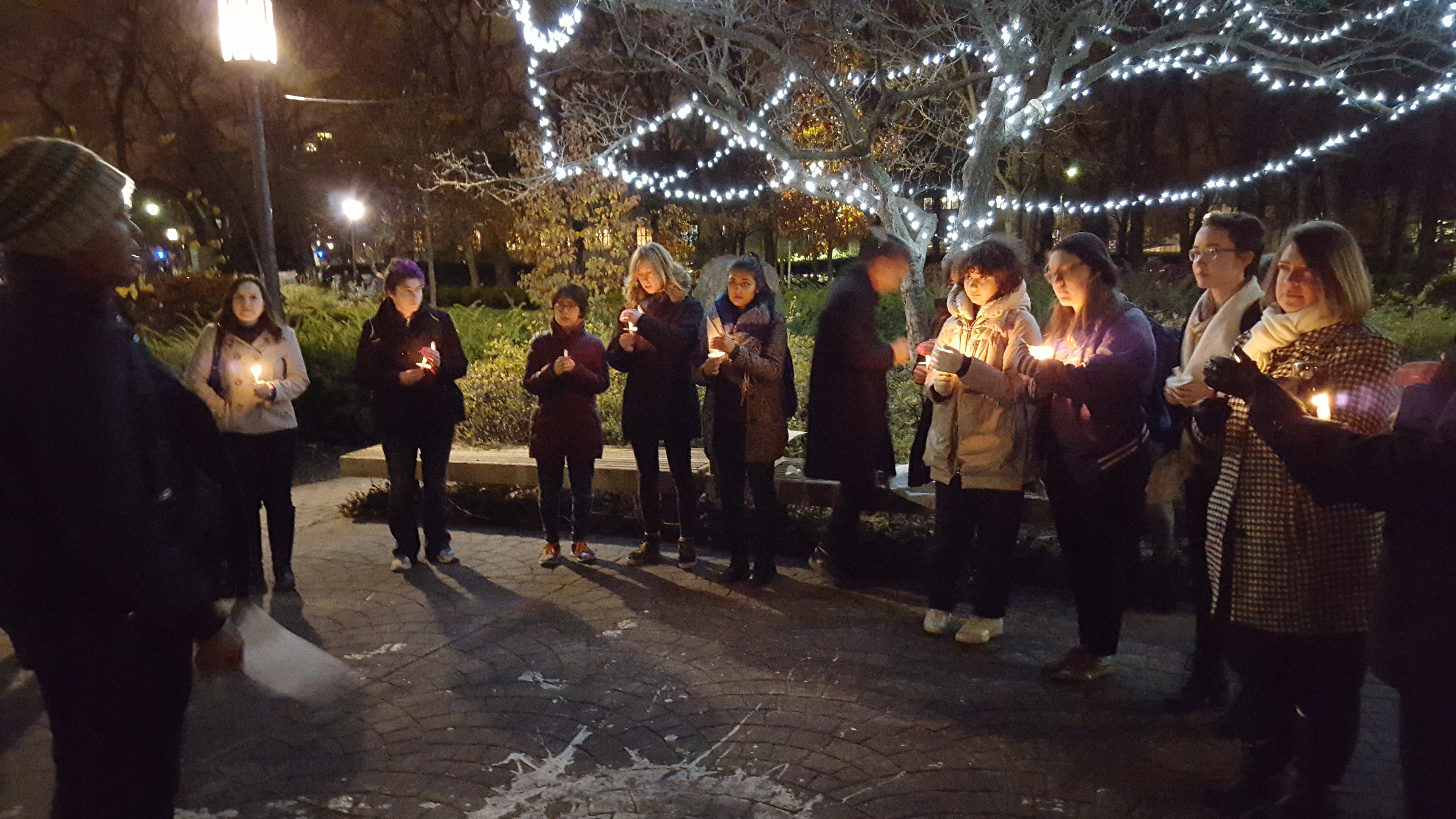 Huddled in winter coats and woolen scarves, students commemorated the 22 trans identifying people murdered in the past year, along with others who suffered anti-transgender violence. Jordan Turner, Assistant Director of the Multicultural Student Center, recited each name and the crowd chanted ‘say their name.’ Candles were passed out in memoriam.

“Candles represent those we have lost, that their spirits live on,” Jordan Turner, Assistant Director of Multicultural Student Center told the crowd, “So as you guard the flame just know that you’re guarding their spirit.”

Even as public figures like Caitlyn Jenner and actress Laverne Cox increased the visibility and raise public support for transgender rights, 2015 marked the worst year on record for anti-transgender violence. Twenty-two transgender people were killed this year, according to the National Coalition of Anti-Violence prevention programs, 19 of whom were transgender woman of color. At least thirteen were killed in 2014.

Recognizing the grief and discrimination many face, associate university chaplain Jackie Marquez began the vigil by exhorting people to stand up for transgender rights. Students later spoke, echoing her call and placing an emphasis on the need to discuss intersectionality and stand up for transgender women of color, who face disproportionate rates of violence.

"We will continue to live in holy defiance and fight for justice and inclusion," Marquez said.

After the vigil, students walked to the Gender and Sexuality Resource Center for an informal discussion on the transgender rights and inclusion. Sipping hot chocolate and cider, students searched for answers, many reaching the conclusion that even when LGBTQ+ issues are discussed on campus, transgender people are often left out of the conversation.

"I feel like a large part of the LGBT movement doesn’t recognize trans issues," McCormick graduate student Kevin Chow said. "I think it's important to pay attention to the different issues that trans people face, whether it's mental heath issues or the threat of physical assault."

Kate Slosburg is the community facilitator for STAG, a community group of queer-identifying Greek life members and student athletes. She said the Greek Community’s gender binary can make transgender people feel excluded. After most people had left, she stayed to field ideas on how to help make a safe space for gender and sexual minorities.

"[STAG] doesn't have a lot of 'T' representation in the LGBTQ spectrum," Slosburg said. "I want to do what I can to show my support and allyship for trans members in the community, because currently what I'm doing is not reaching the community."

Jod Taywaditep, the associate director for training at CAPS, attended the vigil and the discussion. He told students CAPS was always available to discuss transgender issues. He said the stigma against transgender people can create and exacerbate mental health issues among Northwestern students.

"All of the students who I see who identify as sexual minorities.. one of the concerns is how safe is it," Taywaditep said. "And even if physical safety is assured, there still is the issue of whether it is an accommodating or understanding or accepting place."