Laurie Schiller is an accident of sports history.

This year, Schiller will retire as the second winningest fencing coach in NCAA history. He is arguably the most accomplished name in Northwestern Athletics since quarterback Otto Graham left Evanston in 1944, the head coach of one Olympian, 17 All-Americans, and 16 straight top-10 finishes in the NCAA championships.

But step into Schiller’s office and you feel like you’ve stepped out of Patten Gymnasium and into Harris Hall. Two African Barkcloths, finely woven gold tapestries of Moraceae tree fibers adorned with ominous faces, overlook a picture of Joshua Lawrence Chamberlain in full Union Regalia. “My favorite general,” Schiller tells me.

For the better part of 30 minutes, we sit and talk about the Civil War, his years as a New Left activist and the modern Democratic Party (he’s not feeling the Bern). The 65-year-old Schiller owns a mane of gray hair and an overgrown mustache befitting an aging child of the 60s. When he drifts to fencing, it’s from a military view. 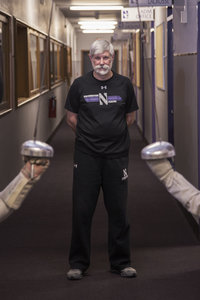 He shows me a picture of himself in Union Regalia. A nationally-known cavalry expert, Schiller taught Civil War reenactors how to properly wield a saber. “I guess it’s a connection with swords,” he said, “I’ve just always been fascinated with military history.”

Schiller has a Ph.D. in African history, spent time researching in Kenya and now has 30 years of teaching under his belt. So how did this academic become one of the greatest coaches in Northwestern history? How does anyone get anywhere: he needed a job.

Some coaches live and die by their trades; Northwestern men's basketball head coach Chris Collins is the son of NBA star Doug Collins, and baseball head coach Spencer Allen played baseball from boyhood. Schiller said he fenced because he just wanted to beat his older brother. He didn’t start until high school, and after continuing as an undergrad at Rutgers University, came to Northwestern in 1972 as a graduate student with no intention of picking up a saber.

While in Patten one day, though, a fellow student noticed his Rutgers fencing jacket and asked him to join Northwestern’s team, at the time a small varsity-club sport that rarely competed for much of anything. He later left the team to do field research in western Kenya.

When he returned to Evanston, the team was in crisis, and so was he.

The son of two teachers, and now a Ph.D. himself, Schiller long sought to teach. But in a weak academic job market, Schiller couldn’t find a professorship. Meanwhile Northwestern’s Hungarian fencing coach Charlotte Remenyik left for Ohio State University, jeopardizing the future of fencing at Northwestern.

So the University made Schiller a deal: Northwestern would let Schiller teach if he coached the team. The only caveat: no salary for the first three years. Hesitant, but hungry for an opportunity, Schiller agreed.

"History's my passion. Fencing's what I do."

It wasn’t much of a team at the time - just some students who played in high school or took Schiller’s P.E. class - and Schiller says he had no idea what he was doing. He recalls coaching Jim Carpenter, who went on to become Northwestern’s only Olympic fencer years later, and putting him at the wrong position.

“I would have made him foil but I didn’t know at that time,” Schiller said. “I was not very smart.”

That’s not quite how Carpenter remembers it, though. He joined the team after taking Schiller’s gym class and says the coach changed his future.

“I had never fenced before in my life [and] thought he knew everything in the world,” said Carpenter, now the fencing coach at Stevens Institute of Technology in New Jersey. “I had no idea he didn’t think he knew much.”

Inexperienced, Schiller did the only thing he knew how: he went to school. He attended a camp in San Jose, California, and later earned his “Masters in Fencing,” the only degree that still hangs in his office.

“Being an athlete and being a coach are two different skillsets,” he said, pointing to Duke basketball coach Mike Krzyzewski, who struggled in the NBA but has become one of the most successful coaches in college basketball history. “What I do well is teach, that’s what I came here for… the trick was for me to learn what I needed to teach.”

Yet Schiller said he owes much of his accomplishments to a handful of senators as much as his own determination. In the 1990s, the federal government demanded that universities give equal scholarships to men’s and women’s teams. To counteract the dozens of scholarships for football, Northwestern elevated multiple women’s teams to varsity-status, including fencing.

“At that point, we took the leap from being a nice program that I worked really hard to develop to becoming an elite program where I could recruit the top kids in the country,” Schiller said.

After 30 years as a professor, Schiller dropped teaching and hit the recruiting trail. Northwestern converted the men’s team into a club sport and coaching the women’s team became his only job.

Over the years, Schiller has come to view the fencing strip with the eyes of a general. He speaks of fencing as a “mini-war” and his team as a “unit.” Preparing for the next team is “scouting” to form a “battle plan.” 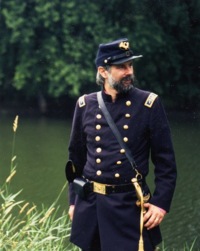 “The good general anticipates what his opponent will do and makes the opponent worry about them,” Schiller told me. “This is what made [Ulysses S.] Grant the best general in the Civil War.”

But if you watch Schiller on the sideline, you might not think coach or general. Schiller and his fencers say he is stoic behind his gray mane and mustache, clapping on occasion or offering a word of support. He once described himself to Chicago Magazine as a “bit of a marshmallow.”

“My yelling is not going to help you, it may in fact destroy you mentally at that point,” Schiller said. “You’ll never see me yelling at a kid for losing.” He contrasted himself with Bobby Knight, the explosive former Indiana basketball coach who once remarked that “hope is the worst word in the English language.”

The tactic seems to be working in more than just the win column. Players view him with such endearment, one once made a now-defunct Facebook page titled, “There’s Nothing Quite Like Laurie Schiller’s Mustache.”

And his players worked hard enough to seal a top-10 NCAA finish in March’s national championships, the final tournament of Schiller’s career.

Now Schiller steps away, turning over the job to assistant coach Zach Moss. If you want to find him, he’ll be back in the lecture hall (he started teaching public courses at the Alumnae of Northwestern University a few years ago), teaching bespectacled retirees in sweaters and slacks who know little about the verbose man standing in front of them. That’s fine, Schiller said. He’s come to know anonymity well.

“If I walk down the street and no one knows who I am, I don’t care,” Schiller said. “I don’t have that much of an ego.”