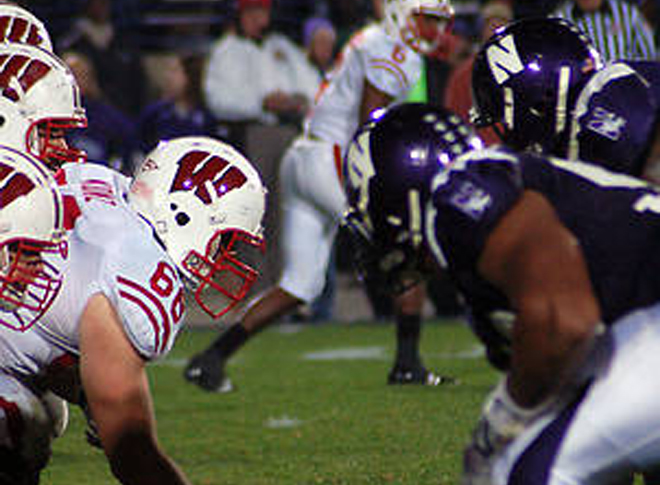 After Saturday’s game, senior wide receiver Rashad Lawrence, who led Northwestern receivers with 149 yards, said the ‘Cats can’t let the loss against Ohio State affect their play in this weekend’s game against Wisconsin.

But there’s still plenty to learn from the defeat.

Head coach Pat Fitzgerald said that No. 19 Northwestern (4-1, 0-1 Big Ten) is "a different team than we were pre-Big Ten play” and expects the unranked Wisconsin Badgers (3-2, 1-1) “to have the same kind of improvement that we had on Saturday” as they have had two weeks to prepare for Northwestern’s arrival.

Interestingly enough, both team’s most recent losses came against Ohio State, so at least Fitz and Wisconsin head coach Gary Andersen can chat about that.

Last week, Northwestern scored all six times it was in the red zone, but only three of those scores were touchdowns. The rest were field goals, courtesy of senior kicker Jeff Budzien, who is returning to his home state on Saturday.

While Budzien has been successful so far this season, making nine out of 11 field goal attempts, Northwestern’s offense needs to come away with touchdowns.

“We had guys that were open, [but] we just didn’t make the shots,” Fitzgerald said. “The same plays that we ran in practice that worked well. We obviously didn’t execute, so we've got to coach the guys better.”

Wisconsin’s opponents score in the red zone in 75 percent of their trips, but only 45 percent of those scores are touchdowns. So Northwestern can’t settle for three points if it hopes to gain a quick advantage against the Badgers.

While Northwestern’s secondary fared well against Ohio State’s air attack and picked off Braxton Miller’s last pass of the first half, defending the run was where the game was lost.

Ohio State’s Carlos Hyde could do basically whatever he wanted against Northwestern’s front. Miller could, too. Combined, they ran for 236 of OSU’s 248 rushing yards and three touchdowns, a problem that Fitzgerald attributed to not getting off blocks quickly enough and not tackling well.

The two-pronged attack consisting of Kain Colter and Trevor Siemian is unique to the current landscape of the Big Ten, and it’s one that needs to stay strong to win against the string of seven conference rivals that Northwestern will face from now until the end of the season.

Both quarterbacks rank in the top three efficient passers in the Big Ten, Siemian passing at 171.3 efficiency and Colter at 160.2. Combined, they have thrown for 1,278 yards and nine touchdowns. In addition, Colter is the team’s second leading rusher, gaining 253 yards on 47 carries.

And Fitzgerald said it’s not lost on the coaching staff how effective this duo has been.

“I think that they understand what we’re asking them to do,” Fitzgerald said. “They’re each other’s biggest fans, and I think they both want us to win as a team.

"Whatever is best for the team, they’ll do.”

The key to success against Wisconsin will be avoiding turnovers and sacks. Siemian’s interception last week proved costly, and Colter’s failed fourth-down attempt essentially ended the game. Siemian was sacked five times as well, a statistic that is not entirely his fault, of course, but a number that he could avoid by stepping up in the pocket away from pressure. This season, the two have thrown five interceptions (three for Siemian, two for Colter).

Against a Wisconsin defense that has four interceptions and three fumble recoveries, Colter and Siemian will have to be wary of the turnover battle and will have to win it.