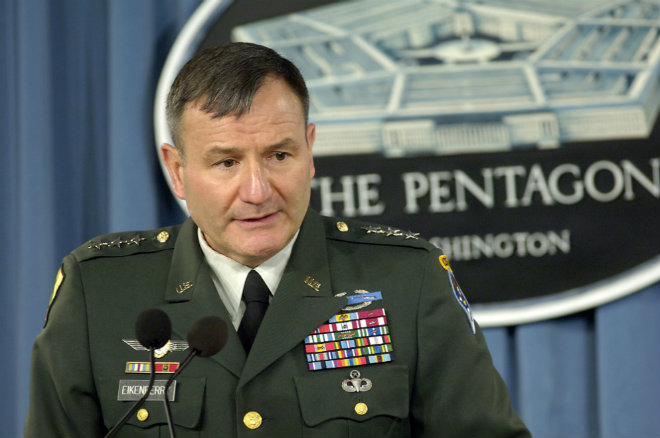 Last Wednesday, ASG voted to postpone a resolution calling for Northwestern to rescind the appointment of Karl Eikenberry as executive director of the Buffett Institute.

Northwestern created the new position after Roberta Buffett Elliott donated $100 million to the Institute, a gift that the administration and faculty celebrated as the then-largest in Northwestern history, one that would allow the center to create new scholarships, partnerships and programs across the globe. The choice of Eikenberry for the position, however, has sparked a lot of controversy on campus.

In February, 48 faculty members demanded Eikenberry’s withdrawal last quarter in an open letter to The Daily Northwestern. A Change.org resolution in support of the demands has garnered 222 of signatures from professors, PhD candidates and undergraduates, including incoming ASG President Christina Cilento. President Morton Schapiro and Provost Daniel Linzer responded in turn, and, since then, administrators, faculty and students have placed numerous dueling op-eds regarding Eikenberry. Political science Professor Jacqueline Stevens continues to publish research on her website against Eikenberry.

So why has the appointment of a man to a position few students knew existed sparked more ire than any faculty decision in recent memory? NBN explains.

Who is Karl Eikenberry?

Eikenberry is a former lieutenant general for the U.S. Army who has worked around the globe and most recently served as a commander in Afghanistan and then the U.S. ambassador to Afghanistan from 2009 through 2011.

It all starts with how Eikenberry was appointed. In February 2015, after the Buffett Institute received its $100 million donation, the University launched a search committee chaired by former University President Henry Bienen that included five senior faculty members and three administrators: the Dean of Kellogg, Sally Blount, Vice President for Research Jay Walsh, and the Director of Global McCormick, Vinayak Dravid.

Former President Bienen ultimately recommended Eikenberry to the committee. In a March Faculty Senate meeting, Provost Daniel Linzer said it was ordinary for the chair of a committee to recommend a candidate. But at the same meeting, faculty senators contended that Bienen wielded undue influence on the final decision.

“Because Henry Bienen decided on this guy, it actually didn’t matter what was going on in the conversation,” Stevens said at the Senate meeting.

In their letter to the Daily, faculty deplored “an irregular, opaque search process that undermined basic tenets of faculty governance.” The University placed an explicit gag order on the search committee as they decided on a final candidate. Linzer said it was necessary to recruit top candidates who might not want their universities to know they are looking at new positions. Faculty have countered said it showed a lack of transparency and allowed Bienen to change the criteria for candidates to best suit his choice.

Maybe the process wasn’t ideal, but is Eikenberry a good candidate?

At the Faculty Senate meeting, Linzer argued that there are many ways to define scholarship, and that Eikenberry’s expertise from 30 years serving overseas, as well as his work as a professor at Stanford and as a student at Harvard speak to his qualifications.

However, Jorge Coronado, co-director of Andean Cultures and Histories at the Buffett Institute and one of the leaders in the fight to rescind Eikenberry’s appointment, said that universities actually have strict definitions of scholarship: a PhD and research published in reputable peer-reviewed journals.

Eikenberry has never been published in a peer reviewed journal, does not have a PhD and, faculty pointed out, only taught at Stanford in the area of policy rather than strict social science (i.e. how a government can apply social sciences, as opposed to developing the theory behind it).

Is it also a matter of conflict of interest?

Part of what has the faculty so concerned is Eikenberry’s continued ties to the U.S. Army, including a recent trip to Rwanda to discuss American-Rwandan military cooperation, as well as previous comments about how the humanities should be used in tandem with businesses and military interests.

According to the Daily letter, when Eikenberry was asked how he could garner support for the humanities from captains of industry, he said, “Business is about delivering products to people. That’s where the arts and humanities comes in, as a source of inspiration but also a communication bridge.”

Stevens argued that his connections to the business industry may be why the University picked Eikenberry over other qualified candidates. “What does he offer that other more qualified people don’t have?” Stevens said in an interview with NBN after the faculty senate meeting. “One thing that he offers are his contacts to elites in foreign markets that are of interest to the NU Board of Trustees.”

Why does everyone keep talking about soft power?

In December 2014, Eikenberry told the Chicago Humanities Festival that the U.S. should use the humanities as “soft power” to advance US interests overseas. As Eikenberry notes in the same speech, Harvard University’s Joseph Nye defines “soft power” as “the ability to willingly attract and co-opt and persuade rather than co-erce.”

In the video, Eikenberry says rebuilding an ancient citadel in Afghanistan and endowing a high-level Afghan music school helped establish Afghanistan as a stable nation and global contributor at far less cost than military intervention does. While faculty said this was an affront to academic freedom, some ASG senators argued that it was taken out of context, and he was actually simply arguing for using the humanities instead of military force to accomplish foreign policy goals.

For faculty and students, the quotes underscored concerns that Eikenberry’s longstanding ties to the U.S. military undermine the importance of the humanities and could threaten the academic independence of the Buffett Institute.

“Having this outlook is extremely dangerous and colonial,” said SESP junior Matt Herndon, who’s leading the fight against Eikenberry in ASG.

“Simply put, the Buffett Institute has so many resources and can be a very important place for critical study of the humanities, and having him lead it after a sketchy search process and large faculty resistance compromises the mission of Buffett,” he said.

The final vote in ASG will take place on Wednesday April 20, after senators have the opportunity to gain more information and set the record straight on contradicting factual information previously introduced in ASG.