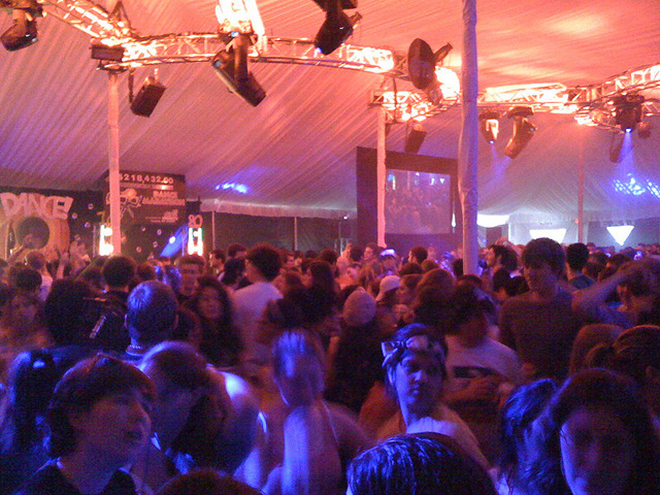 There are plenty of reasons to dance. Help contribute to worthy campaigns. Build relationships with your teammates. Cross something off your Northwestern bucket list.

For the last two years, I’ve given up my pre-Reading Week weekend to spend 30 hours with people I love deeply, along with hundreds of strangers. Freshman year, I was enthusiastic, and perhaps a touch naïve, but excited for DM 2013 nonetheless. That weekend went by in a literal blur; I was so worried about falling asleep, and so nauseous, that all I allowed myself to recall was the raw emotion of Block 10. Thus signing up for the next year’s Dance Marathon was simply expected. I didn’t even think twice when I set up my fundraising page. It wasn’t until I was curled up in my bed on the day of DM, taking my last snooze for the next two days, that I wondered to myself, why am I doing this? Would it even matter if I didn’t show up?

This is why I don't dance anymore.

In Northwestern Dance Marathon’s earliest days, it truly was a marathon. Dancers asked donors to pledge sums of money for each hour they managed to stay on their feet. The longer you danced, the more money you would raise for that year’s beneficiaries. There was an incentive, a motivation to persevere past the sore feet and sweaty clothes to make it to the final hour. Dancers essentially made a promise to their donors to give it their all.

Thus, making it to the end of the marathon was an accomplishment that not everyone could say they did. Allowed to leave whenever the exhaustion got the best of them, dancers raised as much money as their bodies would permit and no more.

To break up the repetition, Dance Marathon in the 1970s and ‘80s literally took over the entirety of the Norris Center: blackjack, rooms designated for musical performances, beer pong, movie screenings, even showers and naptime. Rather than shuffling from one foot to the other by hour 15, Dance Marathon was a casual event, rather than a time to push our bodies to their very limits.

Today, dancers are required to raise $400 before the designated deadline, before they ever step into their spandex leggings. Of course, dancers are encouraged to challenge themselves to raise even more. It feels like a business, one that sometimes seems to benefit the wealthiest students here and give them an opportunity to pat themselves on the back for being charitable. It might not necessarily force deeper thought, especially considering the beneficiaries are rarely the ones in the most desperate need of funds.

We all know how easy it is to get swept up in our Northwestern obligations during the school year and how tempting it is to crawl back under the covers after a long week. We’re all good at procrastinating the things we signed ourselves up to do, including fundraising and learning about DM’s charity of choice. This inevitably leads to many frantic attempts to finish fundraising in the last few weeks before DM, so as not to drop out of DM completely and have nothing to show for the $200 already raised: pleas to family members and deposits from personal bank accounts, all for the privilege of standing up for 30 hours straight.

No matter how hard I tried to fundraise and educate myself as much as possible about the Danny Did Foundation and Team Joseph, something always came up. So when I got to Block 1 and then Block 5 and then Block 10, I could not bring myself to feel okay getting teary-eyed listening to the stories of those DM was supporting: I didn’t get to know them and I didn’t do anything more than ask my parents for money. Me being physically present for Dance Marathon had little bearing on how much money the whole weekend would eventually collect, as evidenced by the fact that those who fundraise before DM weekend and then drop out still effectively donate that money to the cause.

This is not to say that I didn’t think my participation wasn’t important. It was, and still is, an incredibly formative part of the first half of my Northwestern experience. Dance Marathon remains an integral part of Northwestern’s history and legitimacy as a university, and those who participate are by no means bad or inconsiderate people. They are still promising to exert physical effort as a means of raising money, and that is incredibly admirable.

My view of DM as a highly regimented, formulaic fundraising machine is not one I set out to adopt. In fact, it’s one I’m saddened I now have. Maybe it’s a result of my ever-growing skepticism as a Northwestern student, or maybe it was my overwhelming desire to cry tears of exhaustion during Block 10 instead of tears of joy by the end of my 60 hours. I’m over-the-moon proud for my friends who are dancing and organizing this year’s Marathon; it is truly a huge undertaking – one of the largest student-produced fundraising organizations in the entire country – and nothing I say will or should ever take that away. I will never knock those who wholeheartedly dedicate months and months of their lives to make this weekend happen.

I just wish we as a University could move back to DM’s roots, a chance to hang out in Norris with games and friends and inner motivation, and forgo the fundraising minimum in an attempt to break the record from the year before.

Last year, Joseph’s mother said herself that it didn’t matter how much money we raised, or if we beat last year’s fundraising total. Showing the Northwestern community cared was enough for her. When will it be enough for us?