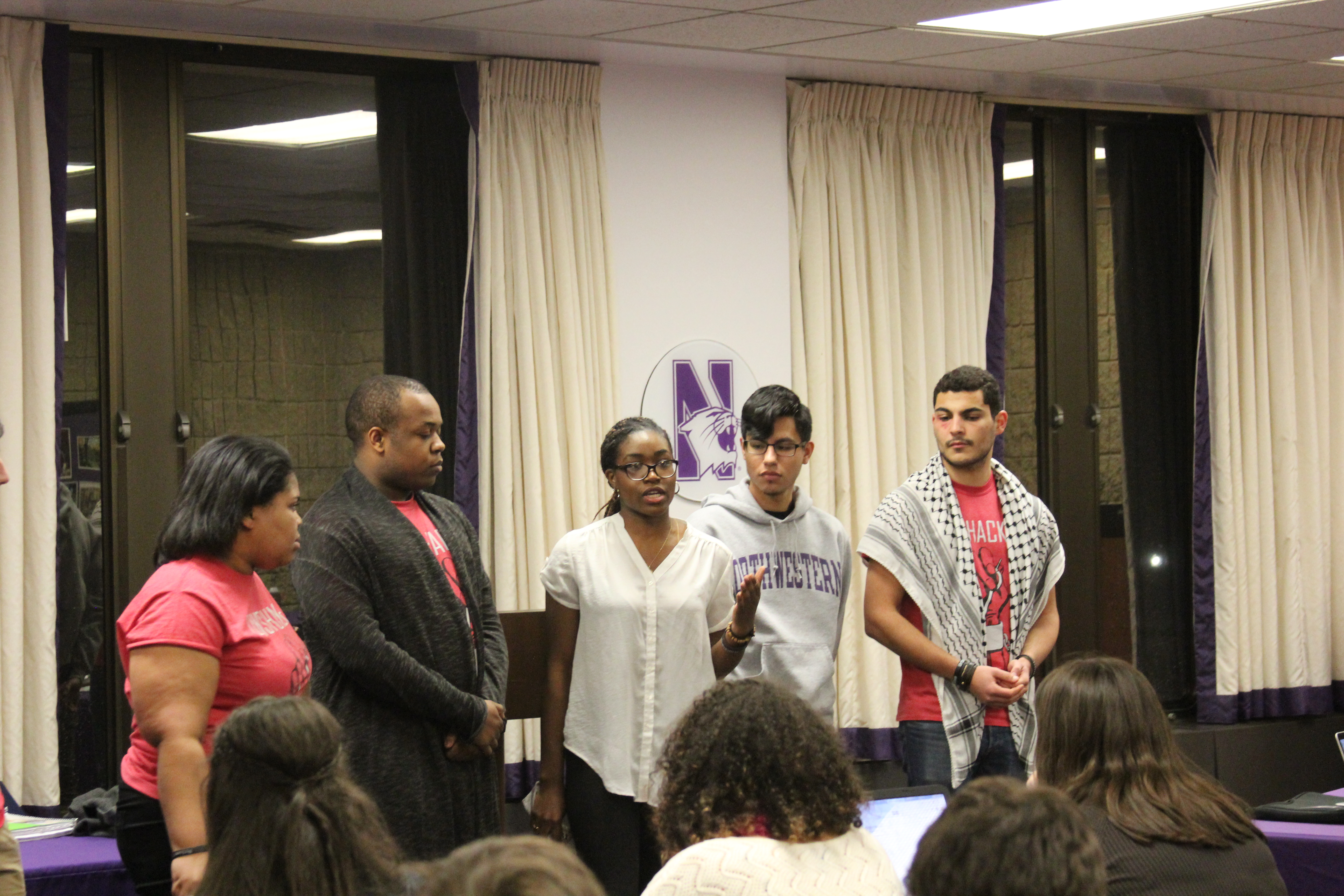 On March 2, Unshackle NU members demanded a responsible investment committee as part of their ASG resolution. Photo by Jason Mast/ North by Northwestern

After three years and three student-led divestment resolutions, Northwestern will create a responsible investment committee to advise the University on how it invests its endowment, President Morton Schapiro and Chief Investment Officer William McLean announced in an email to ASG leadership and Fossil Free NU Wednesday.

But within the hours of the email being released, student leaders from Fossil Free NU, Unshackle NU and NU Divest greeted it with cold skepticism. What the University saw as a measure to resolve a cycle of protests and fruitless talks between activists and the administration, student activists viewed as a token gesture that prioritized some movements over others. There is a general sense among the student activists that the move will have little impact on the Board of Trustees or the endowment they oversee. According to Al Cubbage, Vice President for University Relations, the creation was an executive decision from Schapiro and McLean.

NU Divest was the first to ask for a responsible investment committee. Unshackle reiterated that request in the ASG resolution which passed last week. But Schapiro and McLean only sent the email to leaders of Fossil Free NU and the President and Vice President of ASG. Cubbage told NBN that the letter was sent to leaders on “divestment issues and to the ASG leadership.”

While they were pleased with the creation of a committee, members of Unshackle NU were skeptical given the way the University announced it – without notice or consultation with student organizers. Representatives of NU Divest declined to comment on the issue as of Thursday.

“The way that it’s being portrayed is that there’s been some sort of contact with NU Divest and Unshackle which is not true in any way,” Unshackle NU organizer and SESP sophomore Gwendolyn Gissendanner said. “It’s the University trying to say that they’re appeasing us in some way, but they clearly have not contacted the exact people who called for this.” 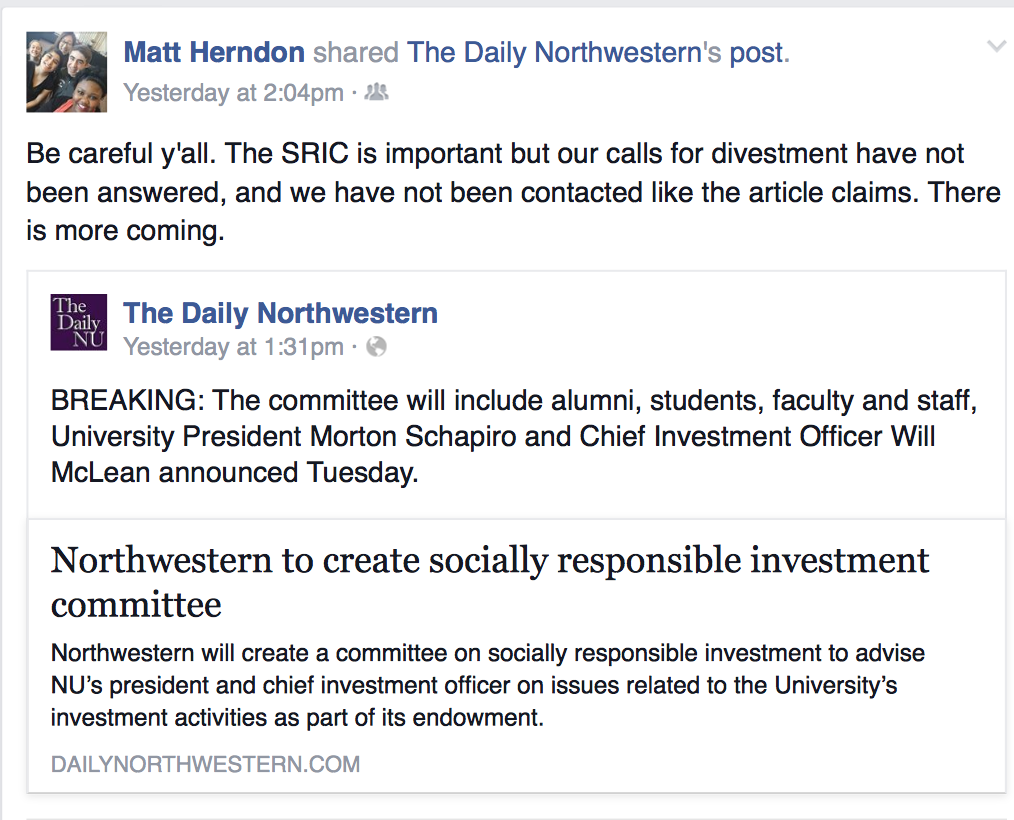 In an interview Wednesday, Cubbage said that the email only went to Fossil Free NU because they were the only movement in active dialogue with the investment committee. FFNU has met with the members of the Board of Trustees five times in the past year and protested multiple meetings, including a luncheon last week after it was barred from meeting the full Board of Trustees.

NU Divest has met with McLean numerous times since ASG passed their resolution just over a year ago. “By no stretch of the imagination was the University unaware that Unshackle and NU Divest were advocating for a committee,” Christina Cilento, co-leader of FFNU, said.

McLean declined to be interviewed for this story, but said in an email that the “statement speaks for itself.”

Cilento, a SESP junior, said she was surprised by the email because FFNU had not been focusing on the committee. She said the University was trying to placate students, while ignoring the racial justice issues NU Divest and Unshackle NU raise, which she supports.

“The fact that the University did not reach out to NU Divest and Unshackle just kind of confirms that they don’t hold those movements in as high esteem as Fossil Free,” Cilento said, criticizing the University.

Unshackle and FFNU members expressed displeasure at being left in the dark. Although the email announcing the committee says that faculty, alumni, students and staff will be on the committee, it did not indicate that student activists would be consulted on who would be selected or how the committee would operate. McLean told NBN in an email that the details would be ironed out over the next two months. 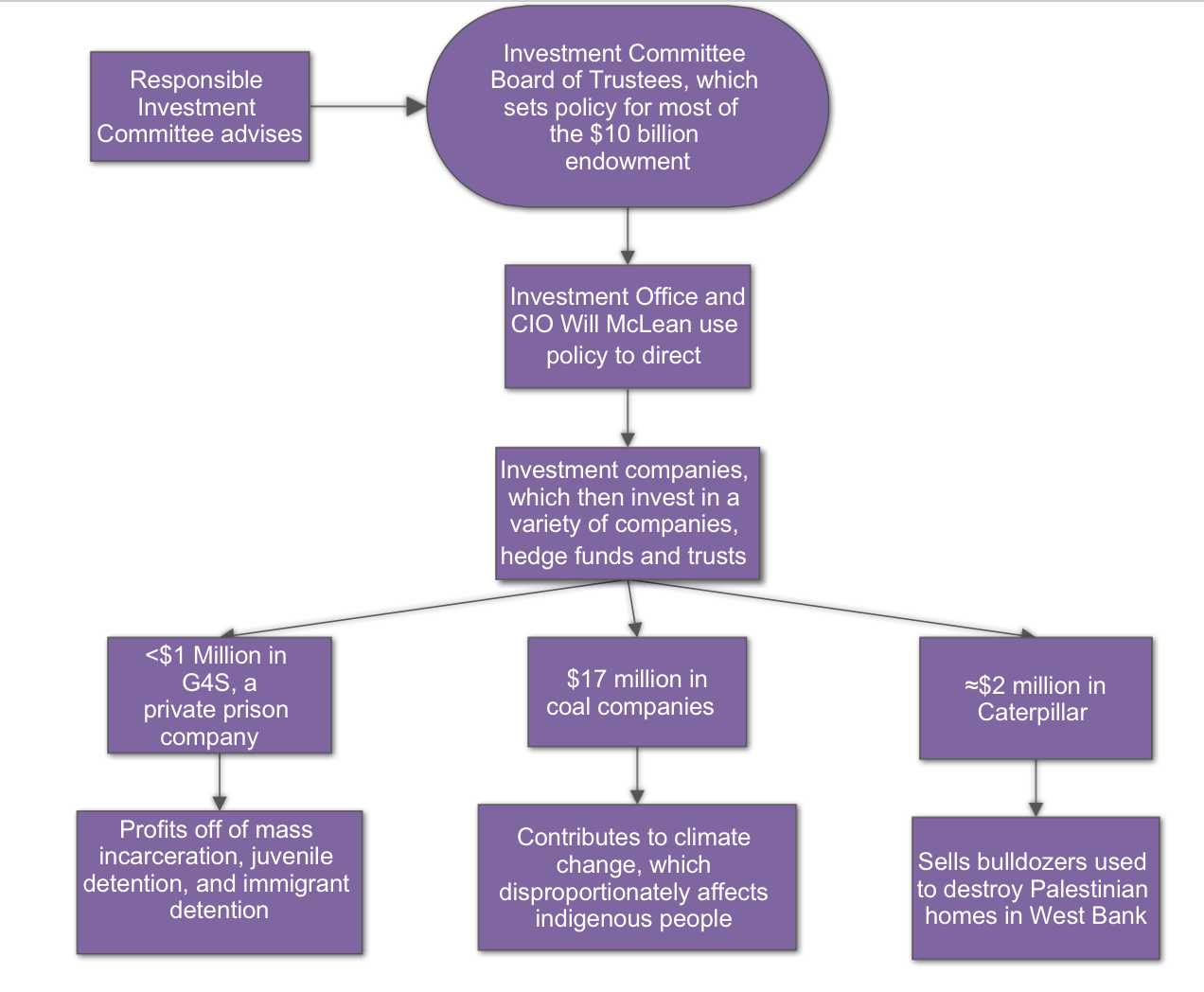 Although the creation of the Socially Responsible Investment Committee, however it was announced, represents the culmination of over a year of persistent activism, its influence on the end goal – divestment – may be limited.

Before announcing the resolution, Schapiro and McLean spent three paragraphs of their email explaining that the purpose of the endowment is to maximize financial return. “There is a difference of opinion regarding what should be the appropriate role of the University’s endowment... it does not seem likely that those differences would be resolved with further meetings of [students and the investment subcommittee]," they wrote.

The structure of the email, along with an another email they received from McLean in February, made Cilento question the University’s sincerity. In an email obtained by NBN, McLean writes that the Board’s investment subcommittee unanimously agreed that “a meeting with [FFNU] before the full committee would not be necessary. As you know, markets are failing globally and our utmost attention needs to be on investment matters.”

T. Bondurant French, chairman of the investment committee, echoed that sentiment in an interview Thursday, saying the University would have to fundamentally change its view of how the endowment works if it were to divest.

“On divestment, we’ve agreed to disagree,” French said. “Our view is that the endowment should not be used for social and political statements.”

French said divesting from any companies would hurt the University’s long-term finances, and argued that small changes to a $10 billion endowment, compounded over 25 to 30 years, could lead to millions in losses.  Cilento, however, argues Northwestern has to be ready to make a tradeoff between profits and ethics for the committee to have value.

“If the University is just interested in creating a committee and never paying attention to what comes out of it, that's a problem,” Cilento said. All three divestment campaigns have built their arguments on the view that simply investing in certain companies is an inherently political statement.

Cubbage said he did not know whether the committee would have any influence on divestment. He described it more as forum for further discussions around investment, focusing on the power of proxy voting and how the committee could teach students about how the endowment works.

Through proxy voting, shareholders of a company can raise and vote on issues like environmental and ethical employment practices, potentially influencing a corporation to, for example, pollute less. Yet Cilento said proxy voting doesn’t tackle the heart of the issue. “It doesn't change the fact that the corporations themselves are the problem,” Cilento said.

According to the Association of Governing Bodies, 20.1 percent of private universities and over 70 percent public universities have student representatives on their Boards. While most of these committees have not led to divestment of any kind, Columbia University sold their shares in private prison companies after their socially responsible committee recommended divestment. That gives student activists at Northwestern some faith.

“The letter does not seem promising, but that said, the committee does exist,” Gissendanner said. “This institutional change is something we can work with to better reflect the exact things we wanted from the the resolution.”

Now, in the aftermath of the news, the three divestment are meeting to plan their next course of action. That may include public statements and, for Unshackle NU, a Faculty Senate resolution. 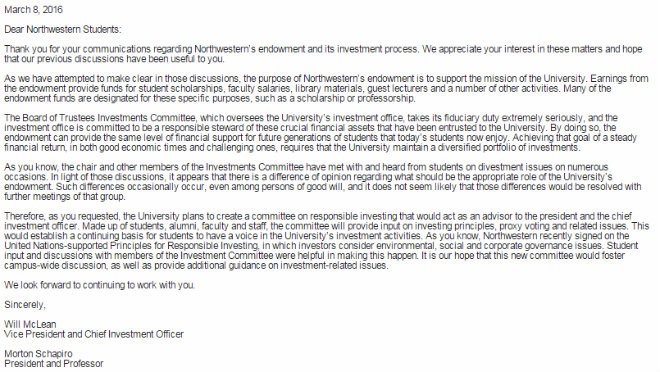 Editor's note 3/11: This article originally cited early reports from The Daily Northwestern that three divestment campaigns received the email regarding the new committee. This was not the case, nor did The Daily state it to be in their original article. NBN regrets the error.