Professor Deborah Tuerkheimer discusses rape law under Trump as part of Take Back the Night
By Yoonjie Park
9:16 p.m. April 25 2017 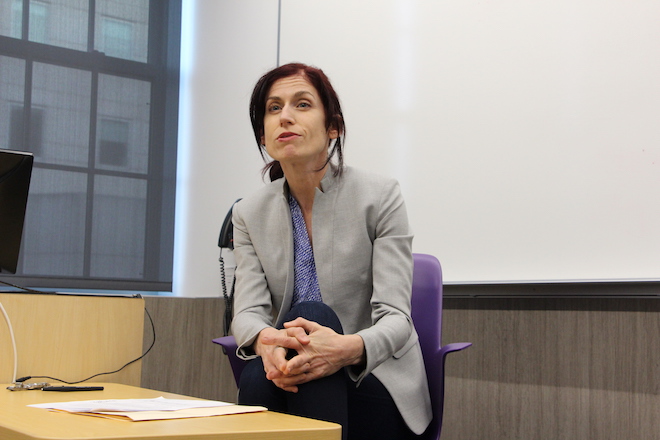 “I don’t believe that the new president is going to take away all of the progress that has been made, but we still have to be careful because the gains were harder fought,” said Professor Deborah Tuerkheimer in response to a question about how Title IX may change under the new administration.

Tuerkheimer, a Northwestern Law professor and member of the American Law Institute (ALI), spoke at the Rape Law in Flux event for the second day of Take Back the Night 2017. Over 40 people attended the event, held in Kresge 2430.

Tuerkheimer began by discussing articles she has been working on for the past few years. One was about the “gap between what counts as sexual assault in popular discourse and retrograde criminal laws.” Another was about the significant issue of over-policing and under-policing, for instance in the case of sex workers. Her last article, which has yet to be published, discusses the credibility discount that rape accusers face from law enforcers.

“The ways in which biased disbelief is a real failure of justice is something we should be thinking about more than we have,” she said.

Tuerkheimer is currently working on two ALI projects related to sexual assault. The first, the criminal code project, is an ongoing effort to revise the Model Penal Code provision on sexual assault, which was adopted in 1962 and is "in desperate need of revisions.” The code tends to be a contentious topic, especially because of disagreements about the definition of sexual consent, which Tuerkheimer called “the real sticking point.”

The second project is to “produce a best practices document aimed at documenting the principles” regarding sexual and gender-based misconduct on campus. Tuerkheimer stressed the fact that the ALI is “avoiding a one size fits all approach”, and that “for better of for worse, the document produced will be at a high level of generality.”

Tuerkheimer ended her speech on a positive note, saying, “I am somewhat optimistic that the document will contribute to an ongoing conversation.” She also emphasized the importance of the work being done, and how it is “really important for the ALI to issue some guidance that will be influential in holding universities’ feet to the fire.”

After opening up to questions, students asked how queer people would fit into this new definition and Professor Tuerkheimer went deeper into the proceedings of the ALI. One student asked how the ALI gathered information from sources that could potentially be biased, to which she said that “the effort is to embrace the biases and use people as representatives in the process” rather than “pretend we’re all coming at this without any bias.”

When asked to describe what an effective way to discuss sexual assault would look like, she said the conversation should revolve around agency because “exercising consent is really important to be a sexual agent.”

“I’m seriously astounded by how many people came, and it’s really great to see so much interest in the issue," Johnson said. "Given what’s been going on around campus, it’s great to see how people want to learn more about the issue. Professor Tuerkheimer was great."