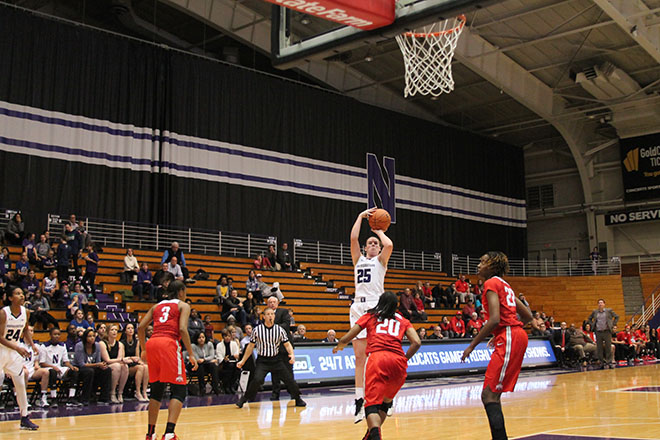 Maggie Lyon puts up a fadeaway jumper in the second half. She led all Northwestern scorers with 24 points in their upset over No. 5 Ohio State.

Put a Wildcat, or any animal, through enough adversity and eventually it gives up – or fights back.

“Northwestern was a team that needed a win, we were a team that wanted to win,” Ohio State head coach Kevin McGuff said. “They played much harder than we did.”

Ohio State pushed a full-court press from the opening tip, forcing point guard Ashley Deary to dance and dive past mid-court. But she did almost every time, setting up one of Northwestern’s best shooting nights of the season.

Northwestern's ball-handling, a big problem in their losses to Purdue and Michigan State last week, was more controlled against Ohio state. Despite the Buckeye’s full court press, the 'Cats won the turnover battle 16 to 15.

Deary was the only Wildcat starter to shoot under 45 percent from the field or finish with fewer than 10 points. but she led the offense with 11 assists, along with 7 rebounds and 3 steals.

“She kind of sets the tone for them,” McGuff said. “She’s also a good defender, she really harassed us.”

Northwestern will need to be on top of their game again Sunday, as they go up against No. 8 Maryland on the road.