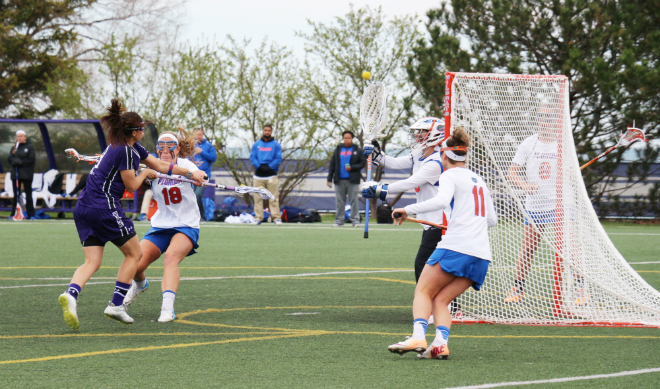 This season, the third time truly was the charm. And today, it only took 60 minutes of regulation game play and two overtime periods.

After losing to them twice earlier this season, the Northwestern women's lacrosse team finally held on to the lead to overcome the pesky Florida Gators, 12-11, to book a trip to Baltimore, Md., for its 10th consecutive trip to the NCAA Final Four.

As many Northwestern-Florida postseason matchups have been, the score ping-ponged throughout the entire game and neither team wanted to give up easily. The seniors, who were putting on the Northwestern uniform for potentially the last time in their careers, lead the attack, scoring nine of the Wildcats’ 12 goals. Alyssa Leonard and Kat DeRonda led the ‘Cats with a hat trick each.

Northwestern got out to a slow start, getting down 4-1 in the game’s first 13 minutes. Leonard was the first player on the board, but no Northwestern attacker would score for another 23 minutes. Freshman Lydia Cassada scored the first of four unanswered goals to end the first half, putting the ‘Cats up 5-4 on the Gators heading into the locker room.

Florida, much like Northwestern, wasn’t going to take an offensive onslaught lying down. The Gators quickly went up 8-5 to start the second half with goals from sophomore Lauren Lea and junior Shannon Gilroy, who leads the NCAA in goals scored per game with 4.15 as of May 12. Northwestern’s Christy Turner, Kate Macdonald, Leonard and DeRonda rattled off shots to stay within a goal for the rest of the game.

A game like this is almost begging to go into overtime – maybe even two.

In the first overtime period, junior goalie Bridget Bianco didn’t even have to face a shot. Though the Northwestern defense struggled against the No. 2 scoring offense in the country, it stepped up in the game’s extra minutes, finishing the game with 16 ground balls and two caused turnovers.

After three minutes of no scoring, this matchup went into a second overtime, as if to emphasize just how badly both Northwestern and Florida wanted to win. After three meetings in the last month, it’s no surprise that these ALC rivals were locked in a nearly 17-minute dead heat. At the end of the day, Kat DeRonda may have wanted it the most.

Scoring the final goal to tie the game in regulation, she had another chance to prove her worth and represent her senior class. Unassisted, she slid past the Florida defenders, who looked slow to react to her drive. She bounced the ball past goalie Cara Canington with only 16 seconds left on the overtime clock, leaving almost no time for Florida to get another look at the goal.

Give it up to @TheKatsMeow4 for her game-winning overtime goal that sent the #B1GCats to the NCAA semifinals. pic.twitter.com/XHV4Gjs68r

For the 10th time in a row, Northwestern will be a Final Four semifinalist in the NCAA Division I women’s lacrosse tournament. Seven of those ten times, the ‘Cats emerged as the champion.

On Friday, Northwestern will face No. 1 Maryland, head coach Kelly Amonte Hiller’s alma mater. The last time these two teams met, it was 2012 NCAA Final Four and Northwestern eeked out a 9-7 win, before winning the whole thing.

Beyond the Box Score

Overtime record this season: The prospect of an overtime, much less two overtimes, did not seem to work in Northwestern’s favor. Coming into today’s game, the ‘Cats had played in two overtime games and lost both. On Mar. 9, Northwestern dropped 11-10 to Ohio State and lost 12-11 to Johns Hopkins.

UNC’s out, Virginia’s in: Earlier today, the reigning champion North Carolina Tar Heels were bested by the Virginia Cavaliers, 10-9. North Carolina only scored two goals in the second half, allowing Virginia to run away with the win. That leaves the same three teams in the Final Four as last year’s group with one newcomer: No. Maryland, No. 2 Syracuse, No. 5 Northwestern and No. 6 Virginia.