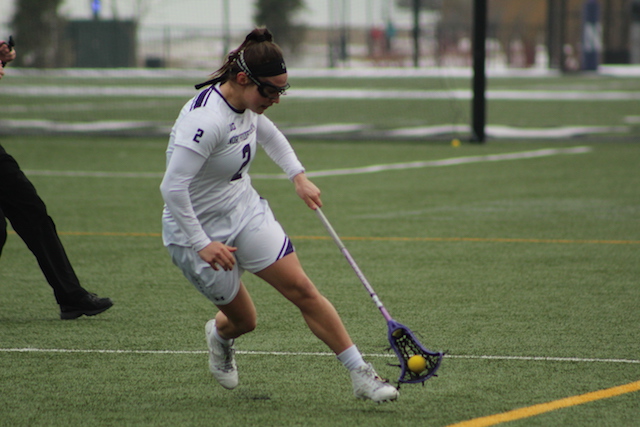 Lasota and the Wildcats have been good so far, but the second half will tell the story of their season.

Almost halfway into the season, Northwestern has been playing at a high level – just not a championship level. During the non-conference slate, the ‘Cats have ranged between competitive and dominant. If the team improves in a few areas, the Wildcats could see themselves making a deep run in the NCAA tournament. For a refresher, NBN Sports has you covered with rapid recaps of every game:

The ‘Cats began the year with an offensive outpouring, solidifying a strong start to the season. Selena Lasota, back from the season-ending injury that saw her miss 17 games last season, scored career goals 128 and 129 to move within 15 goals of cracking Northwestern’s all time scoring list. The team’s 49 shots were the most they’ve taken since the 2007 game against Holy Cross. Twelve ‘Cats scored off nine assists, already tying the most assists in a game they had all of last year. The first-years got involved; Kate Copeland, Jill Girardi and Taylor Pinzone scored the first goals of their college careers, and Girardi and Pinzone added an assist each. Danita Stroup led the ‘Cats with a hat trick, the 10th of her career.

In the first ever meeting between the two sides, Lasota dominated the game and followed up her debut with a four-goal, three-assist performance punctuated by a highlight-reel scoop shot to make the score 13-0 ‘Cats. Northwestern continued its strong and balanced offensive performance; the 13 assists for the ‘Cats were the most they’ve gotten in a game since 2011. Brianna Stroup scored a hat trick to become the first first-year Wildcat to net three goals in one game this year. Pinzone followed her impressive two-point debut with two more goals, while Nicole Beardsley extended her point streak to 11 games with one goal and two assists. The defense was an iron wall in the first half, holding Mercy to one shot, producing no goals and forcing 14 turnovers to complement the offense. The goalkeeper competition is an interesting subplot to watch moving forward, as Julie Krupnick and Mallory Weisse split time minding the net. Neither was pressed into much action – Krupnick made one save while Weisse made two.

A dominant performance against the Buffalos cemented Northwestern’s status as a national title contender. Lasota continued her strong start to the season with a three-goal, three-assist game, scoring a point in six of Northwestern’s first eleven goals. Her performance was marked by an absolute rocket of a goal from just inside the 12-meter mark that put the ‘Cats up 4-0. The ‘Cats, however, almost blew a 10-goal advantage after the Buffaloes cut the game to 11-7 with 14 minutes remaining. The defense held firm, led by Krupnick, who played her first career complete game. She set season highs of five saves and four ground balls by the end of the night. On offense, Danita Stroup scored two goals, marking her third consecutive multi-goal game for the ‘Cats.

The comeback from a four-goal deficit for the ‘Cats almost succeeded – Lasota, playing with a Blue Devil face guard shadowing her for the entire match, scored three goals in a valiant effort. In a relatively even match, the Blue Devils and the ‘Cats had the same number of shots and ground balls, with similar turnover numbers as well. The one area where the ‘Cats fell short was in draw controls, where they lost the battle 7-12. Duke goalkeeper Gabbe Cadoux preserved the win with three saves off shots by Lasota, Nicole Beardsley and Lindsey McKone, who all missed potential game-tying shots during the last few minutes of regulation.

The Wildcat defense was the key in a big 9-5 win over USC. With a one-goal advantage going into the half, Northwestern’s 13 forced turnovers and 13 ground balls in the second half propelled them to victory. Danita Stroup and Selena Lasota continued their stellar seasons, pacing the offense with three goals each; Lasota moved to 10th in program history in goals scored with the 142nd of her career. Julie Krupnick saved three shots in the first half to maintain Northwestern’s advantage, despite the fact that USC outshot them 10-5. Shelby Fredericks won six draw controls in her return from injury.

Against the No. 1 team in the nation, the ‘Cats proved that they could hang at the top, even if their effort fell short. Shelby Fredericks again dominated, winning 13 draw controls, but the Wildcats were sloppier than the Seawolves, surrendering 15 turnovers to Stony Brook’s 11. The turning point in the game came with about 13 minutes left: With a one-goal deficit, Fredericks was fouled within 7 feet of Stony Brooks’ goal. Fredericks proceeded to net her free-position chance; however, the goal was called off due to an illegal stick penalty. NU was just 2/11 on free position shots. Offensively, Sheila Nesselbush scored a career-high five points, with four goals, carrying the slack due to a disappointing showing from Lasota, who finished without a point.

The Colorado matchup proved that Northwestern belongs in the elite tier of teams this season. They thoroughly outclassed the Buffs en route to an 11-1 first-half advantage. Colorado provided a fiercer fight in the second half, but Northwestern was able to hold ground and claim the victory. Although perseverance was unnecessary against Canisius and Detroit Mercy, the ‘Cats proved they could handle adversity when it strikes.

The 16 ‘Cats who scored in the first two games of the season equal the same number that scored all of last year. Although Lasota has already established herself as the team’s most deadly offensive threat, this is clearly no one-woman show. Northwestern has depth, and quality depth at that. Speaking of depth, 13 assists from the ‘Cats against Detroit Mercy marked their most since 2011. If these numbers hold, Northwestern’s playmaking will have drastically soared since last year, where they averaged a shade above four assists per game.

Lasota was named Big Ten player of the week, and her performance proved it with six goals and three assists in her first two games. Her injury is long behind her, and the Wildcats’ attack should drastically improve for it. Already, Northwestern has outscored their first three opponents by a margin of 54-17.

Northwestern has done a phenomenal job so far integrating their first-years and finding their offensive rhythm. Even so, Amonte Hiller will look to limit turnovers and prevent big runs by opponents as she attempts to guide the Wildcats back to the top.