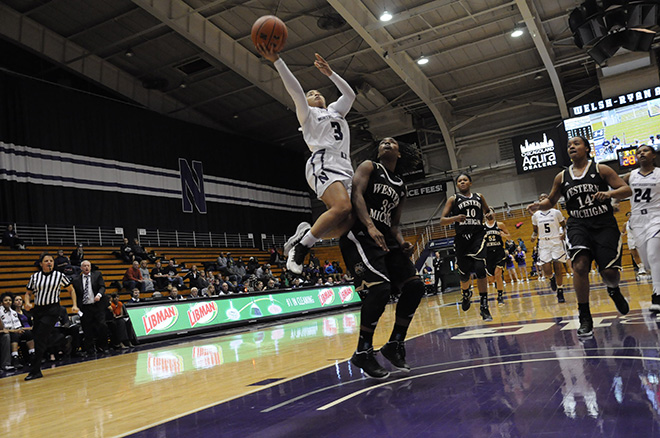 Ashley Deary drives against Western Michigan on Nov. 22. The 'Cats are off to their second consecutive 8-0 start.

Two more bite the dust. As Illinois and Michigan fell for the first time this season, the Wildcats took home decisive victories on the road at North Carolina (5-4) and at home against Milwaukee (3-3). No. 15 NU is now 8-0, one of two remaining undefeated teams in the Big Ten along with No. 5 Maryland.

The Tar Heels were chasing Northwestern from the get-go in Chapel Hill on Wednesday. The ‘Cats opened on an 11-0 run, with baskets from the same four scorers who have led them all year: Christen Inman, Ashley Deary, Nia Coffey and Maggie Lyon. By the end of the first, North Carolina was down 17. By halftime, the score was 54-29 in favor of Northwestern.

The Tar Heels rallied after intermission, but Lyon kept them at bay. The senior finished with a season high 31 points as Northwestern defeated UNC 85-72. Nia Coffey dropped 22 and grabbed 11 boards for the double double, and Deary finished an assist short of the same feat.

The reading week-caffeinated 'Cats were on display Sunday, as Nia Coffey turned in one of her best performances of the season to topple the Wisconsin-Milwaukee Panthers. The junior power forward shot 50 percent from the field for 21 points, and grabbed 14 off the glass to secure Northwestern a 69-44 victory.

Freshman Jordan Hankins surprised with a solid showing off the bench. The Indianapolis native entered play with just 23 points on the season, but she scored eight in 13 minutes against the Panthers. A top 100 recruit out of high schools she should factor in more off the bench as the season progresses.

This marks the second straight year that Northwestern has started 8-0. The Wildcats need two more wins to tie last year’s 10-0 mark, but they’ll need to get through finals week to try. Northwestern will return to action action next Sunday down Sheridan Road at Loyola-Chicago.