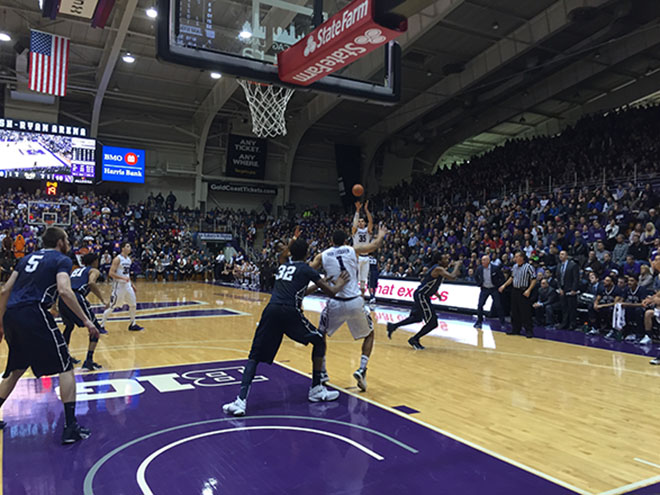 Aaron Falzon puts up a three-point attempt in the first half. He missed, as many of his teammates did, on a combined 3-for-26 night for NU beyond the arc.

“I felt we got what we deserved in this game," head coach Chris Collins said. "I thought Penn State, to start the game, had better energy, they were more competitive, they brought the fight to the start of the game, and I thought it knocked us back a little bit. ... To me, you’re not going to make shots if you don’t have the right attitude to start the game."

In a series that has seen 59-32 and 60-39 games over the last two seasons, the game started in characteristically sloppy form, and stayed that way for the entire first half. Penn State caught fire from beyond the arc and grabbed a quick 20-10 lead in the first ten minutes. The Nittany Lions led by as much as 25-14 in the opening period, shooting 6-for-13 from beyond three-point range.

But near the end of the half, the Wildcats started chipping away. However, NU had to find ways to cut into the deficit aside from their trademark reliance on the three-pointer, as the 'Cats posted an abysmal 0-for-12 mark from deep in the first half. NU shot just 28 percent from the field in the first half. Despite the groans of a packed Welsh-Ryan Arena with each near miss, a couple of late first half floaters from Scottie Lindsey and Bryant McIntosh cut NU's deficit to 30-23, which was the score at intermission.

NU's three point woes only got worse and the groans only got louder in the second half. The 'Cats were 0-for-17 before Tre Demps ended the skid at long last with a deep triple at the 10:24 mark of the first half.

“I thought we were shooting a lot of NBA [depth] threes," Collins said. "So I was telling them ‘we need to get more into the operating area. We still have to take our shots, but we’ve got to get in there and drive the ball.' ... You’re trying to have something or somebody ignite you or get you going, and we just weren’t able to do that until it was too late."

But while NU's shots were clanking off the rim, Penn State found little resistance getting to the rim, and busted open an 18-point lead, 54-36, with eight minutes left in the game.

The 'Cats weren't quite dead yet, though. A 10-3 run (including – no joke – a couple of made three pointers) cut PSU's lead to 57-46 with under four minutes remaining and forced Nittany Lion coach Pat Chambers to call a timeout. NU cut the lead down to seven on one occasion, shooting nearly 50 percent in the second half, but was ultimately unable to get any closer than that as Penn State iced the game from the free throw line over the last few minutes.

“There was a lack of togetherness tonight. I don’t know why or what, but I think everybody slipped,” Demps said. “I don’t think it’s an X’s and O’s thing. It’s a want to and a will to, and that comes on the defensive end and sharp communication and activity."

Alex Olah returned from his foot injury but was pretty rusty in limited playing time, making just one field goal and putting up five points.

“It was great to see him out there, I know how badly he wanted to be out there," Collins said. "I thought he was a little overanxious out there, he took a couple rushed shots. I get it, I’m not blaming him. We just tried to tell him to let the game come to him."

Oddly enough on a bad offensive night, McIntosh registered his first career double-double, scoring 12 points and dishing out 10 assists. On another surprising note, Demps finished with 22 points, and the 'Cats turned it over just four times.

Northwestern will need to turn things around in a hurry, as they'll take on the No. 3 Maryland Terrapins on the road on Tuesday. NU lost 72-59 when it faced UMD at home on January 2.

This post was updated at 11:25 p.m. to include notes from the postgame press conference and extra stats.