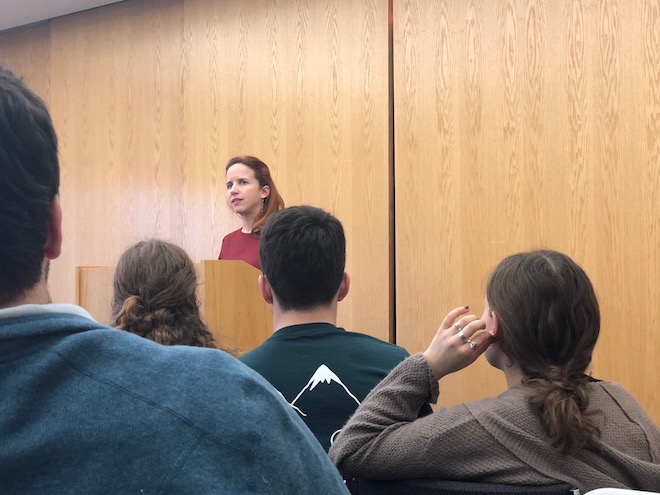 Stav Shaffir, a member of Knesset, did not grow up dreaming of being a politician. Instead, she grew up with Shir, her younger sister who has autism, and the knowledge that children like Shir faced a much different reality than her own.

On Friday afternoon, Shaffir spoke at the Fiedler Hillel about Israeli politics and the tenets of her social justice and transparency-focused vision of government. The event was co-sponsored by Hillel and the Consulate General of Israel to the Midwest.

In a matter of four years, Stav Shaffir went from being a small-scale leader of the 2011 Israeli social justice protests to placing second on Jan. 13, 2015, in the Labor Party primaries. Now, Shaffir is the youngest female Knesset member in Israel's history. It was this gap between the “Israeli ethos” and the treatment of children that propelled Shaffir into a new role as an activist.

“That gap between the ethos, what I learned in my school, and what I saw in her school made me an activist,” Shaffir said. “I became an activist, went to the youth movement when I was a teenager. Before my military service, I built a special educator group, and I went to areas to volunteer with kids from poor families. I then went to the army … and became a journalist.”

During his opening remarks, Michael Simon, executive director of Northwestern's Hillel, commented on the discourse surrounding discussions of the Middle East.

“On topics related to Israel, the Middle East and so much more, too often the discourse is framed in black and white. Difficult facts that challenge one’s point of view are sometimes ignored or downplayed so as not to undermine one’s position,” Simon said.

During Shaffir’s discussion of people’s beliefs regarding politics, she commented on the relationship between politics and corruption.

“I thought that politics meant corruption. Whenever I enter a room like this – doesn’t matter the age of the people or the sect – I ask them, ‘What is the first word that comes to your mind when you hear politics?’ and then the entire room together says, ‘Corruption,’” Shaffir said. “I realized that we don’t have the privilege to tell ourselves this excuse and to think that there is corruption, but we’re just going to let it be and not fight it the way we can fight it.”

In 2009, after returning from the Olive Tree Scholarship Program, a conflict resolution program, Shaffir was excited to make change in Israel. The reality of her situation hit after she organized many protests that “were all a big failure,” because the same 200 people would show up every time.

“People kept telling us, there is no way that things are going to be any different in the future. There is no way that Israelis are going to be more active about their lives and trying to really change reality," Shaffir said. "Then one day, when I was a master’s student, working as a journalist … we decided to protest in a different way about housing prices. Not with holding signs and shouting slogans at empty buildings, but actually moving out to live on the street to protest."

Though Shaffir’s protest began on a local level, it gained momentum. It grew, resulting in people in places like Haifa and Beer-Sheva asking to pitch tents across the country. Eventually, according to Shaffir, there were 120 tent camps that stretched from the north of Israel to the south.

“We went one Thursday in July of 2011, I went to work that day with a sleeping bag and a tent," Shaffir said. "It started with 10 tents, within a few hours there were 50 of them.”

Quickly, though, Schaffir saw that the tent protests had spurred a much larger movement. Protests had expanded from a fight against housing prices to a question of social justice.

Shaffir ascended to her seat in the Knesset in 2011 and joined the finance committee, one of the most powerful and experienced in the body. In her first year on the committee, she exposed decades of corruption in the Israeli budget.

“When you’re new in politics you’re anxious to not make mistakes,” she said.

So, when the pile of papers with numbers on them were deposited on her desk for her signature after the budget had already passed on Knesset floor, Shaffir did something she said was unusual – she actually read them.

“Seventeen billion shekels were moving from one place to another, and the committee was supposed to vote on that in a matter of minutes without knowing where the numbers, where the money is, which I found just crazy. To vote on something like this without knowing what I was voting on was against everything that I thought that politics was about,” Shaffir said.

Upon re-election, Shaffir continued to advocate for government transparency, even starting a transparency committee that she is now chair of in parliament. After chairing the committee for a year, Shaffir was asked to start a similar program for the Organisation for Economic Co-operation and Development.

“We can change anything we want, but we have to organize around it,"  Shaffir said. "We have to collaborate those who march on the street with those who sit in parliament. We have to break that invisible wall between the streets and what happens in our political system. There is no such wall.”

The hope that Shaffir has for people’s ability to create change was tempered by her fears for her party, and concerns about youth participation in Israel and abroad.

“We have to rebuild the progressive camp,” said Shaffir, lamenting the labor party’s lack of unified leadership, internal factions, youth disengagement, and what she called delegitimization by the right in the country. “People, when they are active, they can change reality, and that’s why I’m here.”

Shaffir went on to identify the Israeli-Palestinian conflict as the most important problem facing Israel today.

“There is no other solution. The one-state idea that people from the religious right and some people from the radical left are playing with is an idea that will be destructive for Israel. One state, meaning that the two people, Israelis and Palestinians, after decades of conflict, of hatred, and of trauma are just going to bleed into each other for decades to come,” Shaffir said. “It will have to choose between being a democracy or Jewish and equal to all of our citizens, and that choice will destroy Israel.”

Following the event, Simon highlighted the importance of Shaffir’s message, even for those who are not invested in the Israeli-Palestinian conflict.

“Well, I think, in this particular case, there’s a story around having a young person who got into politics via engagement in social activism. That’s a story that is so relevant for so many students at Northwestern who see themselves as potential activists or leaders,” Simon said. “She’s there bumping right up against the bureaucracy and the challenges, but she’s not backing down. It’s just an inspiring story.”