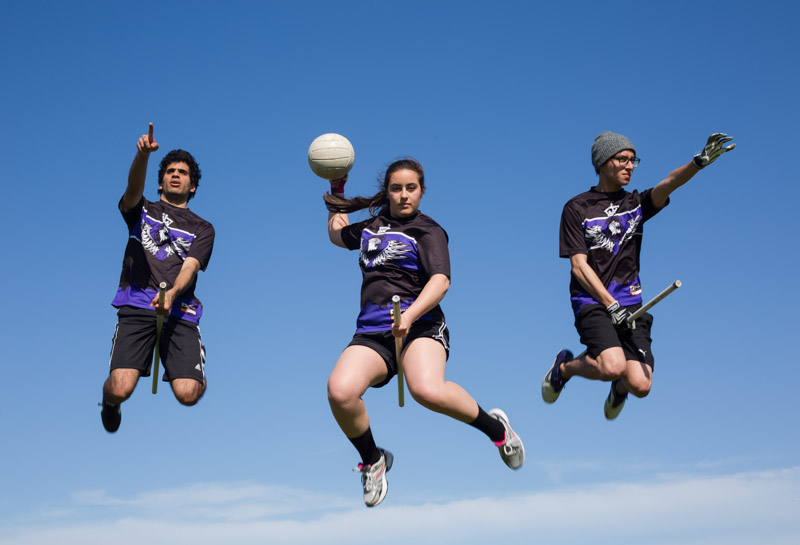 With a lightning bolt scar and a few Gryffindor-inspired robes, junior Juan Herrera could pass for Harry Potter. He sports black, round-frame glasses and a shock of black hair that could be covering up a childhood scar from a certain Dark Lord. All he’s missing is a broomstick, a few hoops and the Golden Snitch — just like the rest of the Northwestern Kneazles quidditch team.

Unfortunately for the Kneazles, there’s no summoning spell to make state-of-the-art equipment and enthusiastic, quidditch-savvy newcomers magically appear with the flick of a wand. Instead, the team has to rely on its captain and president Herrera, vice captain Farzan Fatemi and other executive members to set up hoops, line the fields and coordinate tournaments, a daily time commitment for them.

“It’s hard to impress people at a first glance when you don’t have that money,” says Fatemi, a Weinberg junior.

And, of course, they have to get around the misconception that they’re all Harry Potter nerds.

“People think that most of us are intense, super die-hard fans, but we’re not,” Herrera says.

In fact, he says, half the team hasn’t even finished the series, movies and books.

Rather, team members are simply looking for a sport to fill the gap left by their high school activities. Many team members played soccer, tennis, rugby or football in their hometowns.

Those are the teams that often land former high school athletes at the expense of a sport like quidditch. The fact that most people don’t understand how “muggle” quidditch works beyond the fantasy world of Hogwarts doesn’t help the team recruit new players.

“Anyone can join our team. But we are looking to be athletic and competitive,” Fatemi says. “It is kind of a catch-22 because we don’t want to exclude anyone, so we want to say, ‘Oh if you’re not athletic, that’s okay; you can join and have fun’ but to the athletic people it seems like, ‘This isn’t up to my standards.’”

Essentially, those who would be great at quidditch don’t want to join the ranks of Harry Potter fans.

But for people who have already joined the team, quidditch offers something those other teams don’t: novelty.

“I think if we think about sports culture in general, we think about jocks,” Herrera says. “But with quidditch it’s very different from that. We’re very quirky. We don’t take ourselves that seriously. It just gets kind of ridiculous at times because part of it is acknowledging the fact that it’s inherently ridiculous. That’s humbling.”

Indeed, running around a field for 20 minutes straight with a stick between their legs is not most people’s idea of a sport. After all, Harry and Ron had magic to make them fly. The Kneazles have to use their legs and lungs instead.

Games are exhausting and physically demanding. Players have to sub in and out of the game just to catch their breath. Quidditch requires tremendous amounts of stamina and endurance, something most people don’t realize about the sport, Herrera says. 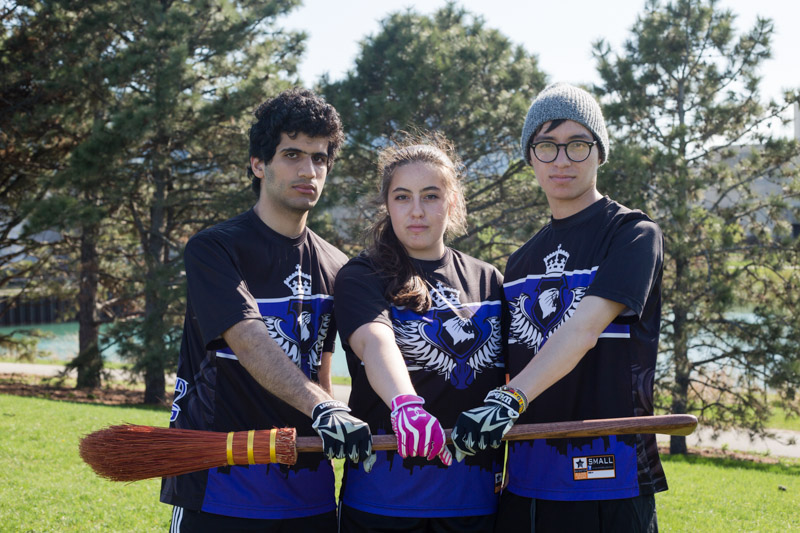 The goal of the game is to score more points than the other team. Unlike in Harry’s world, though, the Snitch is a real human being – often a former cross country runner, who essentially plays a game of tag with the other team’s seeker.

If the Snitch is caught, the seeker only earns 30 points, not 150 like in wizard quidditch. At his or her disposal, however, the Snitch can use many means of warding off seekers. Some Snitches even bring lightsabers onto the field, Herrera says.

The rest of the players are either chasers or beaters. Chasers have to get a dodgeball through hoops to score points, either by shooting or dunking.

But they have to face beaters, who can do basically anything in their power to prevent seekers from scoring. They carry bludgers; they can hit and tackle people. Nothing is off-limits. If a beater hits a chaser, the chaser has to drop the ball and run back to his/her own hoops.

The only players left are keepers, which are glorified goalies who protect their hoops.

Every position, then, is complicated and requires much strategy. Some players can handle the athleticism and game-planning that the sport demands; others are bookworms who like a casual club they can enjoy.

However, not everyone can be Viktor Krum.

“That’s kind of rough because there’s so many people who aren’t athletic,” Herrera says. “Sometimes they just prefer to be casual; there’s others who want it to be more intense, who want to condition every day. We’re still trying to find our own sense of identity, as is the sport at large, really.”

A lack of consistency in the team’s end goals — whether it wants to be low-key or it wants to train for the World Cup — makes it difficult to explain to prospective players what the sport is about.

“If we say it’s really intense, it scares people,” Herrera says. “If we say it’s not that intense, then people are like, ‘I want something to really involved myself in’ so it also turns people off.”

It’s a catch-22 that Herrera and the Kneazles can’t easily shake, resulting in a motley crew of players, but one that is no less a family than Gryffindor.

“If you go to a tournament, you’ll instantly make friends and bond with other players just because you play quidditch,” Fatemi says. “It’s such a different thing to do right now and it’s so rewarding, but not yet appreciated by enough of the community that it’s an incredible community to get to know.”