Nearly a year ago, when Donald J. Trump was still just a swaggering real-estate mogul with a penchant for calling entire ethnic groups criminals, a group of protesters announced plans to push Chicago’s Trump Tower into the Chicago river. At the time, us here at the failing North by Northwestern newsmagazine provided the quality data journalism you needed to know – it would take 90 million people to topple the great two tiered phallus.

A year later, we can safely say, you failed, America. While the precise cartoon-villain dynamics by which pushing a 14-million-pound building into a river shifted electoral outcomes always remained murky, 90 million of you weren’t even willing to try – despite the fact that 62 percent of the country, nearly 200 million people, thought he was unfit to be president. (Probably a good thing given the thousands of people who live and work there and the ensuing Old Testament level flood sure to engulf Chicago once it fell, but still.

So now, with Trump having won the election, the Jill Stein recounts having failed, the last-ditch liberal appeals to electors to abandon the will of their states’ citizens having fallen on deaf ears and with just days left until the inauguration, we are left with one last Don Quixote to stop the Donald. Courtesy of the great political minds at UNC Memes for Dreamy Teens, an idea straight out of National Treasure: “We Steal The Bible They Swear Presidents In On:” 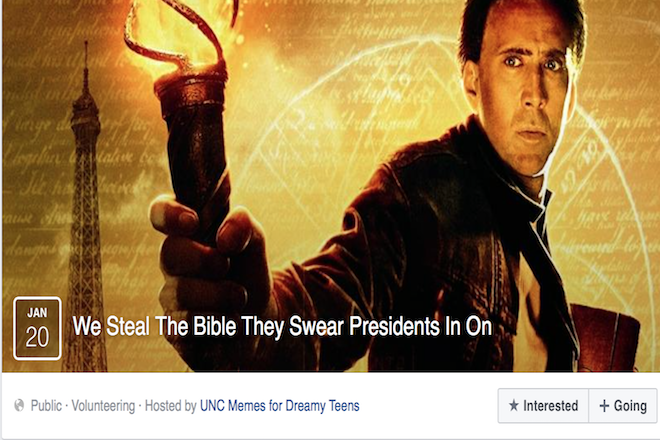 “So Trump won the election, but we can still prevent him from becoming president” reads the Facebook event, for which 4,000 are interested and another 1,200 say they’re going. “They have to swear him in for him to take office ... but if we steal the Bible, they can't swear him in. We get to keep Obama!”

There are several questions here: Can one steal the Bible they swear presidents in on? How would you do it? Do they have to swear him in on a Bible for him to take office? If they don’t, can we really keep Obama?

Last year, we contacted a nuclear physicist to determine how to push Trump Tower into the river. But because my natural state is preternaturally lazy and because Nicolas Cage refused to return my phone calls, we’ll have to settle for Wikipedia and whatever else Google spits out on this one.

Most important question first: Do they have to swear him in on the Bible?

This may be the biggest obstacle. Presidents are not actually required to take the Oath of Office on a Bible. Clause 8 of Article II of the Constitution simply states they have to take the “Oath of Affirmation.”

The precedent of using the Bible comes from George Washington, who used a Masonic Bible from St. John's Lodge No. 1, A.Y.M., and not all future presidents followed suit. Theodore Roosevelt simply took the oath with one hand raised, and John Quincy Adams swore on a constitutional law volume as part of his belief in the separation of church and state. There’s not even clear evidence that any of the nine presidents between John Adams and John Tyler used a Bible.

It seems clear then that Trump does not legally have to use a Bible at his inauguration to become president. That said, given Trump’s large support among the Religious Right, it would likely be an affront to those voters, many of whom were already reluctant to support a demonstrably irreligious candidate, if he didn’t take the Oath on the Good Book. Vice-President-elect Mike Pence, a devout evangelical since college, probably wouldn’t want to either.

There’s another problem, though. There isn’t actually a prescribed Bible presidents use for inaugurations. Obama swore in on the Lincoln Bible and a Bible owned by the Rev. Martin Luther King Jr. Presidents Bill Clinton and George W. Bush each swore in on family Bibles. George H. W. Bush used the Bible George Washington used.

Let’s assume that Trump wants to use either a family Bible, the Lincoln Bible or the George Washington Bible, the most common ones used. (Presumably he will not use the MLK Bible, but who knows? This is Trump’s only tweet about him). To steal the family Bible, you’ll need to break into Trump Tower in New York City or Mar-a-Lago, both of which are monitored 24/7 by dozens of Secret Service agents. The Lincoln Bible is in the Library of Congress, which is monitored 24/7 with cameras in every room and security guards that inspect every item coming in and out, and the Washington Bible is in a New York Masonic Lodge, which is presumably guarded by the Illuminati.

Given that Library of Congress documents have flatly appeared on ebay Inc., the Lincoln Bible is probably your best bet – just get a research license to read it and sneak it out in your purse. Let’s assume you do that, get past the Secret Service at Mar-a-Lago and Trump Tower and break into a Masonic Lodge without being cursed. In fact, let’s say you actually team up with the Illuminati and manage to steal the estimated 250 million Bibles printed in the past ten years and the countless before that, and that both Pence and Trump, appealing to Evangelicals or out of their own beliefs, refuse to give the oath without a Bible – then, after all that, does Obama get to stay president?

There actually is a precedent for this, and, sadly for teary-eyed Obama lovers, No. 44 won’t stay in office.

In 1849, inauguration day fell on a Sunday, March 4 (Inauguration Day was on March 4 until 1937). Being religious men, incoming President Zachary Taylor and Vice President Millard Fillmore refused to take the Oath of Office until March 5. Since the terms of outgoing President James K. Polk and Vice President George Dallas had expired – the Constitution clearly states the presidency lasts four years – many constitutional scholars argue that for the single day of March 4, the executive branch was empty. The presidency then fell to whoever was third-in-line, at the time President Pro Tempore of the Senate David Atchison. With the Presidential Succession Act of 1947, however, the speaker of the house became third in line for the presidency.

So steal the Bible, stop Trump’s inauguration, and at least for a day, you can welcome acting President Paul Ryan.

Donald Trump has still not returned repeated requests for comment.