On Friday at 12 p.m., 10,000 people, including dozens of Northwestern students, will march into downtown Chicago and push the Trump Tower into the Chicago River. It says so, right here on Facebook: 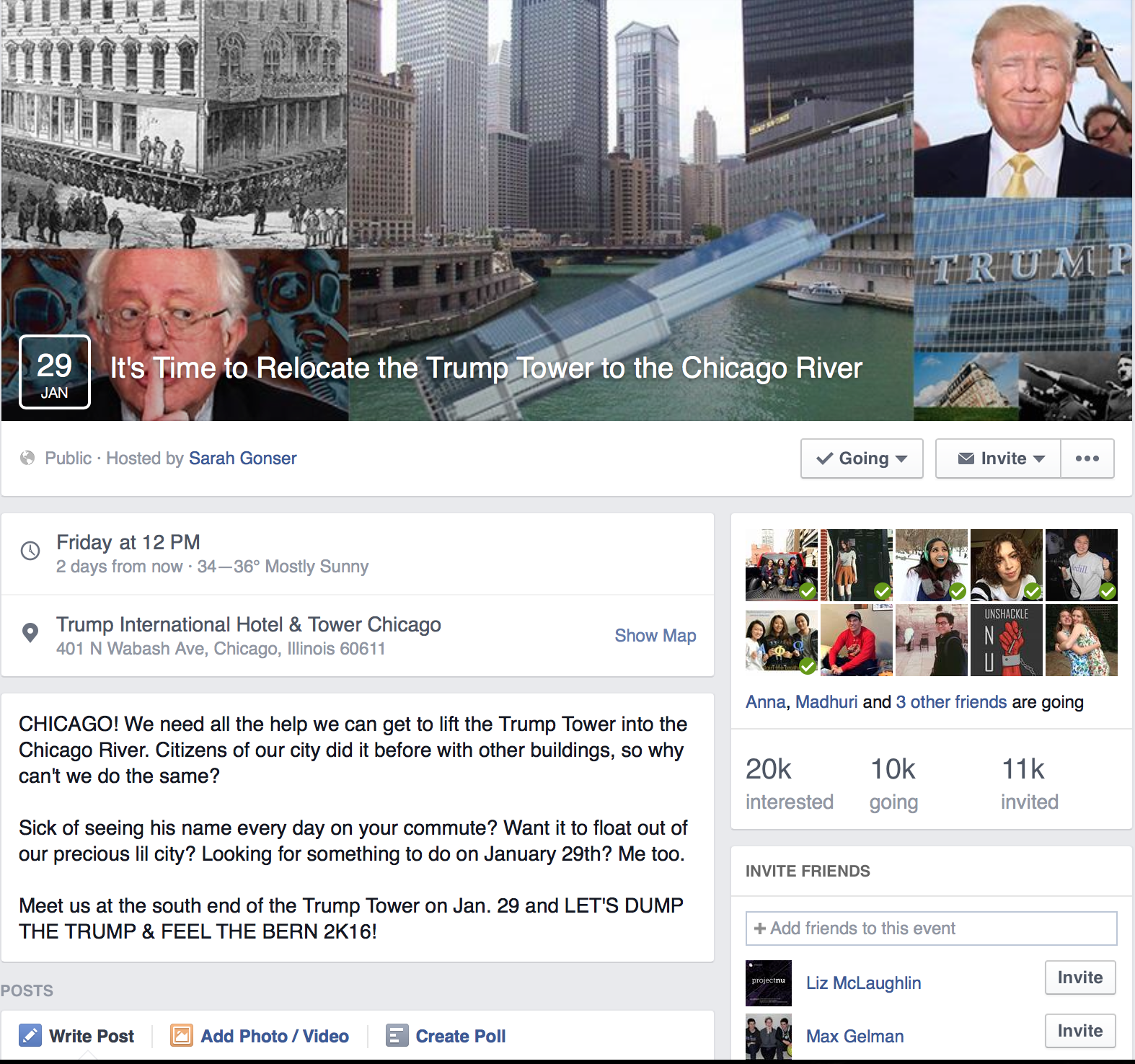 A screen grab from the Facebook event. Photo by Jason Mast / North by Northwestern

Ten thousand people are officially going, but another 20,000 have hit Facebook’s new “interested” button. No data yet on what percent of interested people will actually follow through, but let’s say one tenth show up. That’s still 12,000 people coming to do what the City of Chicago has been trying to accomplish for years.

Obviously this is fake, born of the Facebook feature that produced such world-changing events as "Eating alone in the shower" and "PET EVERY SINGLE DOG." It’s satire, as Lauren Bally, communications secretary of Wild for Bernie and an “attendee,” explains.

“I think the appeal lies in the fact that the page is obviously a joke, but the idea of pushing the Trump tower into the Chicago river is so outlandish it's hilarious,” Bally said.

And like most satire, it’s meant to advance a political agenda, specifically a liberal one.

“I guess the Bernie appeal comes from the idea of dumping the Trump Tower, a huge structure that's basically a symbol of capitalism, racism and xenophobia, could be seen as very pro-socialism,” Bally said. “Dump the Trump and Feel the Bern.”

If you’ve never seen the Trump Tower [aside from the image above crudely photoshopped over a river], it’s giant - 92 stories -, it’s phallic and it has an obnoxious 2,800 square foot gold “Trump” sign on the front that Mayor Rahm Emanuel spent two years trying to take down. "Mayor Emanuel believes this is an architecturally tasteful building scarred by an architecturally tasteless sign" mayoral spokeswoman Kelley Quinn told NBC Chicago in June of 2014. Everyone wants to get rid of it, but it just won’t leave.

It is, in short, the architectural embodiment of Donald Trump.

But the plan to relocate the Trump Tower into the river also comes from a genre that produced a very real and very vocal protest in Chicago. In December, hundreds of protesters marched on the mayor’s office demanding Emmanuel resign after an 18-year-old NYU student started a fake Facebook event for Emanuel’s and Cook County state's attorney Anita Alvarez’s resignation party.

So, we thought, well, what if this event became real? What would you need to push the Trump Tower into the river? Naturally, we asked a nuclear physicist.

Schmidt, a lecturer in his 70’s with thick-rim glasses and snow white hair, performed a back-of-the-envelope calculation. Warning, it gets numbery.

The Trump Tower is held up by a six feet wide concrete core that supports 14 million pounds, according to a report from the Council on Tall Buildings and Urban Habitats (actual name). Knock that down, Schmidt said, and the whole skyscraper goes down the river.

Concrete can withstand a force of 3.65 million pounds per square inch. For calculation purposes, we multiply that by 6850 to convert that into newtons per square inch. This is called the modulus, or the ratio of force to area. 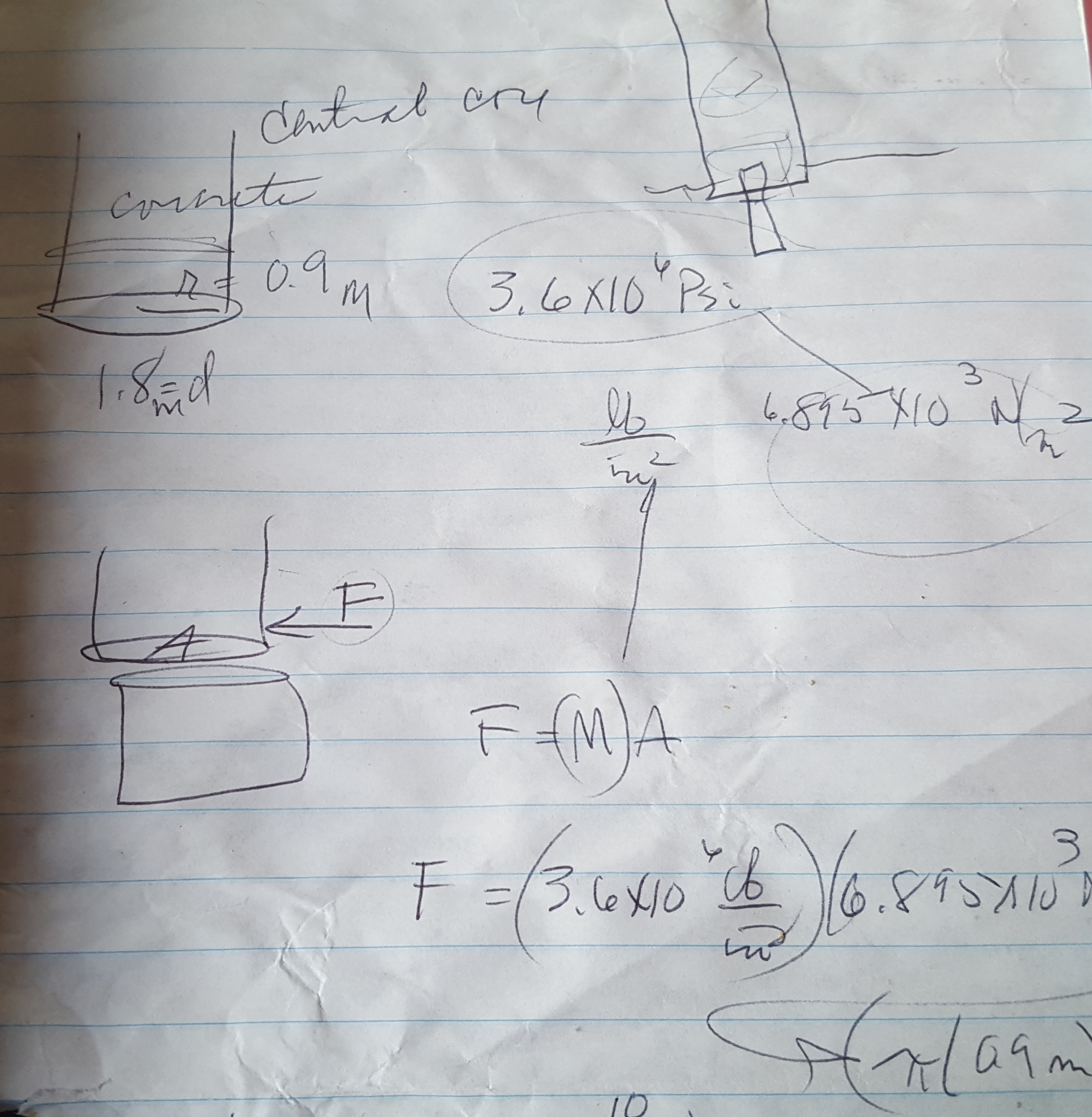 A physicist does back-of-the-envelope math. Photo by Jason Mast / North by Northwestern

“So how does that go for breaking this thing?” Schmidt said. “To break it off, you need to have a force over that area, and the force would be in newtons, the area would be in meters squared.”

The cylinder is 6 feet in diameter, meaning it has a 0.9 meter radius. Use πr2 to find the area, multiply it by the modulus, and you get a total 63 billion newtons needed to push the Trump Tower into the river. That’s 14 billion pounds of force.

So how many people would have to show up? Assuming the average person weighs 160 pounds, Schmidt said, and everyone exerts a force equal to their weight, you’d need 90 million.

And to have the space for everyone to make that push, you’d need a wall about 800,000 meters long.

Donald Trump did not respond to multiple requests for comment.