Bombesquad (noun): a group of women and men focused on supporting women in the food industry through community building, storytelling and food. This past Sunday at the St. Jane Hotel in Chicago I was inducted into this squad; Cherry Bombe, a publication focused on women and food, held its “ Future of Food” event, which asked a panel of women in the food industry in Chicago to discuss their triumphs, struggles and hopes for the future of restaurant culture. Needless to say, I came hungry to learn and left full of knowledge about ways that the food business can improve by implementing sustainability, better pay, local support and gender equality.

“I got to hear from a lot of women who had battled against the odds and overcame so many obstacles placed in front of them because they were minorities in the food industry and because no one believed in them,” said Grace Jaeger, a Northwestern sophomore and member of Spoon University. 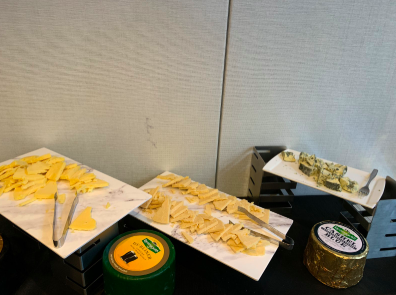 Cherry Bombe sold out the event, filling the conference room to capacity with a crowd of mostly women who were eager to hear from Christian Cikowski from Honey Butter Chicken, Dana Cree from Pretty Cool Ice Cream, Beverly Kim from Parachute, Ellen King from Hewn, Adrienne Lo from Fat Rice, Maggie Hennessey from Time Out Chicago and Chrishon Lampley from Love Cork Screw. Of course, in the back of the room, Cherry Bombe provided a table filled with bread and cheese from Kerrygold and Pretty Cool Ice Cream popsicles, which had a very aesthetically pleasing packaging and simply melted in your mouth, according to Jaeger. What would a food panel be without snacks to mingle over?

Founded in 2013, Cherry Bombe produces a biannual magazine, weekly podcasts and a Jubilee, a day-long conference. It released its first cookbook in 2017 and is ranked the No. 1 female-moderated podcast in America, according to the Cherry Bombe team. 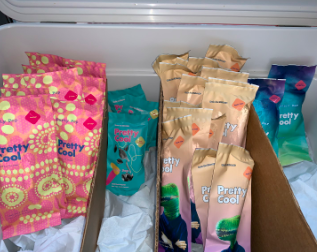 Popsicles that were given out at the panel

Maggie Hennessey from Time Out Chicago started the event with a speech about her struggles as a freelance writer. She joked about her workplace - her home - being pants-optional and the time she mistook chicken for pork at a restaurant. Silly anecdotes shone through the more negative aspects of her speech. She shared her stories about the many closings of magazines she went through which resulted in lost jobs, her troubles obtaining a sufficient budget to go to restaurants at past magazines and her lack of support from the journalism industry. Her passion was evident in her emotion and willingness to share.

Of the same vein, Chrishon Lampley from Love Cork Screw spoke next, her role as a Black, female négociant, otherwise known as a wine merchant. She labeled herself a unicorn because o she accounts for the “1 percent,” she said. She means that only 66 people that own private wine labels and/or vineyards are Black, which is 1 percent of the total number of négociants. Lampley spoke of how she often goes into meetings where the other people do not realize she is the owner, but think she is a representative because of her race and gender. Rather than justify her presence, Lampley said she listens and improves. By the end of each meeting, the others realize her important role in Love Cork Screw, Lampley said. She advised the audience to strive to do better.

“Your passion follows you,” she said. “You can’t follow your passion.”

After Hennessey and Lampley’s testaments, the panel commenced. The panelists covered topics about decreasing waste through compost, buying more “real foods” from local farms and balancing the gender gap in the food industry. Adrienne Lo from Fat Rice noted that her cuisine works better with the summer season’s crops, especially because she works with local farmers. According to Fat Rice’s website, the company focuses on unique Asian cuisines. Lo actually went to Macau, China to learn the recipes directly from the source, she said.

Hearing about the behind-the-scenes of each women’s work illuminated Chicago’s unique restaurants. “[The event] made me eager to explore the food scene in Chicago even further,” Jaeger said.

Ellen King from Hewn, a bakery specialized in breads and located on our very own Dempster street, shared a hysterical story about her beginnings of selling bread: she would bike around the neighborhood with her toddler son handing out bread “like a dealer,” she said. After moving from Seattle to Chicago, King missed quality bread and decided to begin experimenting from home to create the perfect loaf, she reminisced. Participating in what she referred to as “underground food culture,” King began selling her loaves at her son’s school and eventually throughout the neighborhood. The audience laughed as she recounted how she waited on the bike, guarding the bread from the viscous squirrels, while her son ran the bread to the door. She was hesitant to open up a real shop, she said, because she did not want to lose her life to running the business. 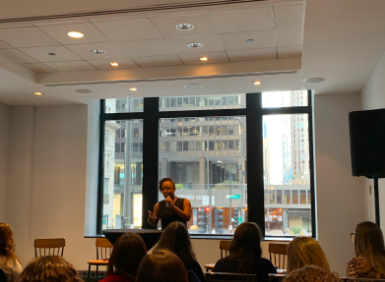 Chrishon Lampley speaking at the panel

The event’s tone grew more serious as Beverly Kim from Parachute described the struggles with Medicare when working in the food industry. She couldn’t afford health care for a while, she said. She attributes the mental health issues of chefs to the lack of economic prosperity and presence of labor intensive work. When Kim had her baby, she said she felt her babysitter was making more money than she made. While people complain about Parachute’s pricing, Kim responds, “whatever, they can suck it.” She says she has to be able to pay her workers fairly and keep the business running.

Honey Butter also confronts the same issue of wages by eliminating tips and integrating the service charge into the prices of the food, said Christian Cikowski. She said that this method solves the problem of biases, arbitrary decisions and possibility for harassment sometimes related to tipping at restaurants. But because the majority of restaurants do not use Honey Butter’s system, the restaurant is at a disadvantage, she lamented.

Each panelist emphasized the importance of the media exposing their experiences to make consumers more aware of what goes on in the restaurant industry and thanked Cherry Bombe for its work in uncovering the behind-the-scenes of the kitchen thus far.

At the end, an audience member asked about how the women handle getting loans since only 2 percent of women who own businesses get venture capitals, according to the panelists. While each woman struggled in this field, their families and friends pulled through, giving them the support they needed.