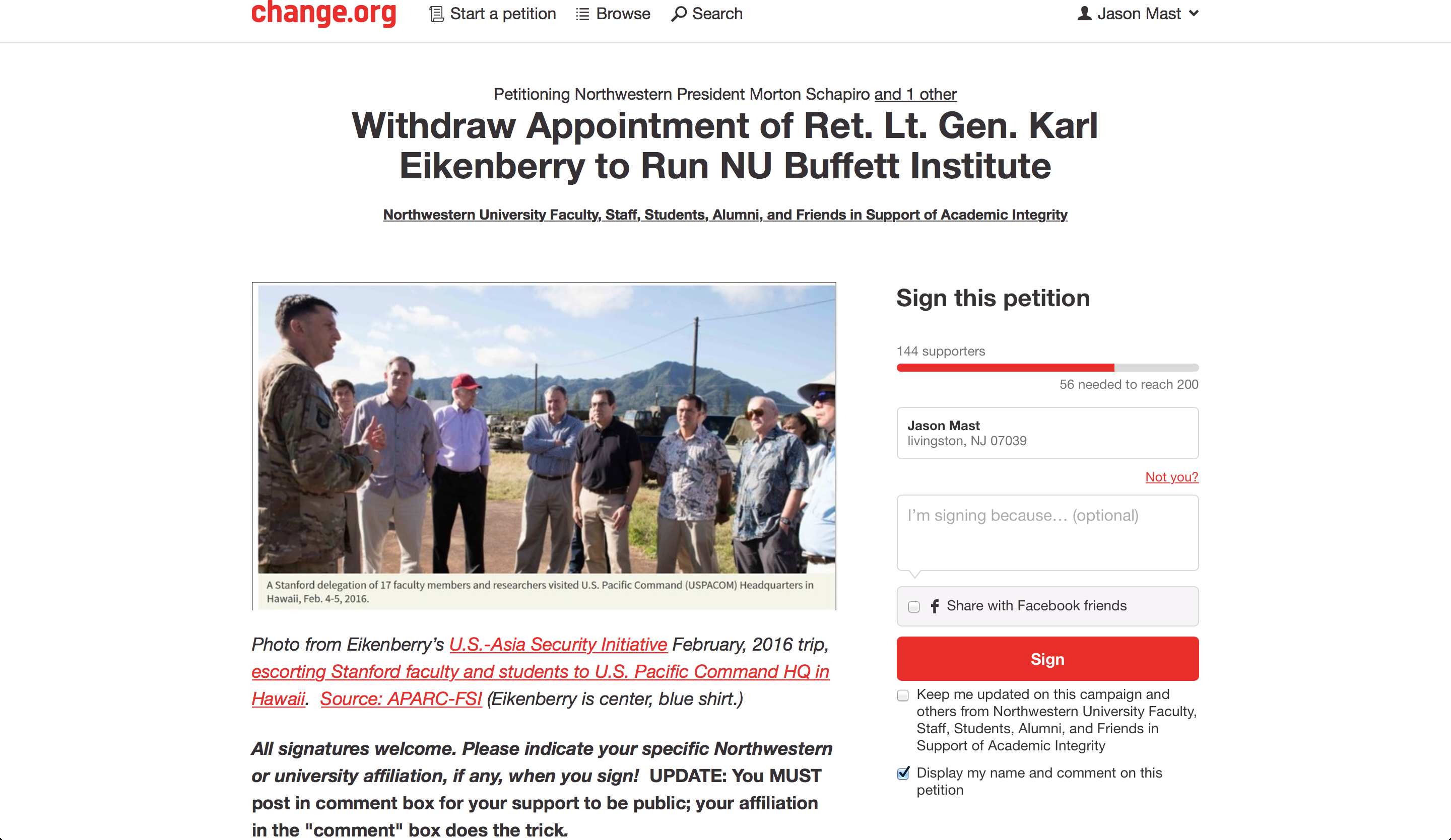 The Faculty senate debated the petition to withdraw the appointment of Karl Eikenberry to Executive Director of the Buffett Institute.Screengrab from Change.org

A faculty senate meeting broke into a debate about the future of Northwestern academics Wednesday afternoon, as senators challenged the findings of the university task force report and the contentious appointment of Karl Eikenberry to Executive Director of the Buffett institute.

Although the January report was designed to address increasing stress among students, faculty questioned whether Northwestern students are worse off than their peers at other universities and universally rejected of the task force’s key tenets to remedy stress.

The task force discussion set the tenor for a tense debate over the appointment of retired United States Army lieutenant general Karl Eikenberry to Executive Director of the Buffett Institute. Eikenberry was chosen in the fall to lead the newly endowed program, but professors Jacqueline Stevens and Jorge Coronado challenged his appointment in a discussion that ranged from what defines a scholar, to a presentation on conflicting interests that Provost Daniel Linzer called a “conspiracy theory.”

The task force's most notable suggestions included changes to the calendar that would adjust the quarter system and limit workloads. But in a preliminary survey of faculty departments, all respondents rejected five-week classes and all respondents said they wouldn’t limit the classes to 10 hours per week. There was moderately more agreement that Northwestern students “are stressed in unusual ways,” with six saying “no”, two “yes”, and one department inconclusive.

Because so few departments responded, Senate vice president Laurie Zoloth, a professor of religious studies, asked the room to raise their hands if their departments thought the University put undue stress on their students. In a room of roughly 40 senators, only four outstretched arms appeared.

Faculty questioned the methodology for determining stress and asked what they thought was causing it. Zoloth said that the data came from the Senior Survey students take before they graduate, as well as reports from CAPS.

Zoloth pointed to students taking on too many extra-curriculars and majors, feeling rushed all the time, and, with rising college costs and an insecure economy, worrying about getting a job. The university often exacerbates these factors with its focus on careerism, Zoloth said.

“The more professional-school, trade-school driven we feel like, the more we tell them about that, the more they become stressed.” Zoloth said.

But many faculty seemed less convinced after her answer.

“I really question the basis of this entire inquiry into stress,” Jewish Studies professor Marcus Moseley said. “You just mentioned factors the university has no control over... honestly, I do not see how we can anyway scientifically determine the level of stress.”

Although the departments who responded to the survey rejected many of the premises of the task force and its measures, they unanimously approved of reducing the course credit required to graduate, and adding more counselors to CAPS. They added their own creative suggestions, including moving Searle Health Center to the center of campus, encouraging public service and adding 10 minutes to each class.

Although Zoloth conceded that Northwestern students may not be any less stressed than students at Yale or Stanford, she said they could still do better.

“It doesn't mean, because we are among people who have stressed students that we shouldn’t do something,” Zoloth said. “We should lead the way in making our students less stressed out and giving a deeper and richer experience.”

Faculty support will be critical to any changes that come out of the faculty report. Although Senate President Edward Hughes said the university initially tried to force the faculty to accept the task force finding, after a 40-minute conversation with Senate leaders he told them, “We won’t do anything against the will of the faculty.”

After nearly an hour of debate, Hughes adjourned the discussion to give time for Stevens’ and Coronado’s presentation. They argued that Eikenberry lacked the credentials of a scholar, and that his ongoing connection to the U.S. military presented a conflict of interest that hurts the integrity of Northwestern as an educational institution.

“He could be seen as apologist to government and not independent to criticize government policy,” professor English professor Barbara Newman said.

The presentation came after Stevens, Coronado and other faculty sent repeated emails to the university starting in September, finally publishing an open letter to the editor in the Daily Northwestern on February 9. Over the weekend, faculty posted a petition on Change.org for President Morton Schapiro to recall Eikenberry’s appointment. As of Wednesday, it has gathered 142 signatures from faculty, students, alumni, graduate students, and faculty from other universities, Stevens said.

Eikenberry, a former U.S. ambassador to Afghanistan and a professor at Stanford for the last five years, was chosen to be the Executive Director of the Buffett Institute in a search process that began after Roberta Buffett Elliott (Weinberg ’54) donated $100 million just over a year ago. Northwestern considered him a scholar for his intellectual work at Stanford and in Afghanistan, as well as his connections in over 80 countries around the world that will allow for an international exchange of faculty and speakers, Provost Daniel Linzer told the Senate.

But Stevens and other faculty said that because Eikenberry lacks a PhD, and had never been published in any peer-review journal or engaged in sustained research, he wasn’t a scholar. Stevens argued the University artificially enhanced his credentials, using organizations that were more connected to businesses than to academia. This in mind, Stevens said his connections around the world were a way for trustees to advance business interests around the world.

“What does he offer that other more qualified people don’t have?” Stevens said in an interview after the meeting. “One thing that he offers are his contacts to elites in foreign markets that are of interest to the NU Board of Trustees.”

Linzer defended the process, saying Eikenberry had been cleared by the entire search committee, which included several humanities professors, as well as earning the support of former Northwestern President Henry Bienen, a respected political science professor. Against accusations that the university was too opaque, he said hirings can’t be transparent because good candidates don’t want the world to know they might change jobs. He called the accusations against him a “conspiracy theory.”

Sparking these simmering tensions, however, was a speech Eikenberry gave at the Chicago Humanities Festival in 2014, in which he advocated for using the humanities as “soft power” to advance US interests.

“A person who talks about humanities as ‘soft power,’ this is the person that we want at the university?” French and Italian professor Michal Ginsburg said. “It is shameful.”

Although the faculty have influence over changes resulting from the task force, they will not have the same control over Eikenberry's appointment, which has already been confirmed by Northwestern and will begin in September of 2016. Linzer said he appreciated the feedback and discussion, and that he had not seen the video.