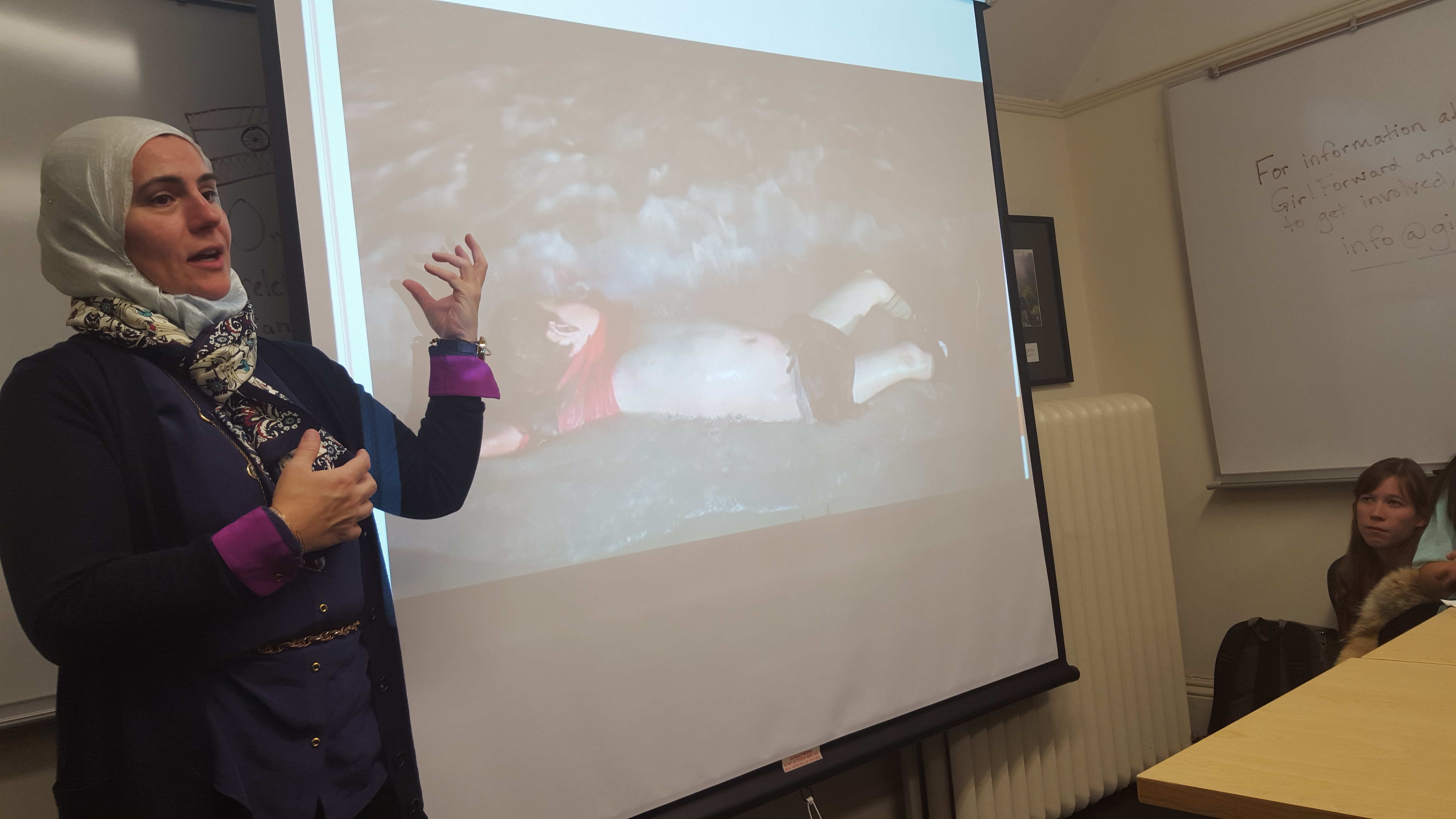 Does anyone care about Syria? That’s what Syrian activist Suzanne Akhras Sahloul asked a room of students in the Global Cafe Tuesday night. Four years of war have led to over 200,000 deaths and eight million displaced persons. Babies have washed up on shores as families flee violence. Republican governors, including Illinois’ Bruce Rauner, have tried to close their doors to refugees.

“It’s been established that no one cares about Syria,” responded Weinberg sophomore Yusuf Kudaimi. He was one of a couple students of Syrian descent in the crowded room. Global Cafe rarely draws a crowd, but tonight students pulled up extra chairs and people were still sitting on the floor as they ate falafel and discussed the Syrian refugee crisis.

Sahloul is the head of the Chicago chapter Syrian Community Network. She helps Syrian immigrants navigate the American lifestyle, running cultural sensitivity trainings and seminars on topics from personal hygiene to job searches.

If anyone in the room didn’t care, Sahloul made it her goal to change their mind, hammering the audience with haunting images and statistics. “The last time we had this crisis like this was in the 1940s,” Sahloul said, drawing comparisons to the Holocaust.

She juxtaposed pictures of the bodies of young Syrian men who suffocated in the back of trucks trying to sneak across the Austrian border against pictures of bodies of Jews piled up in Nazi death cars. She showed photos of three-year old boys laid out on a beach, arms sprawled, stomachs splotched purple and blue, drowned.

Sahloul first ran through the causes of the war, which began after 2009 protests that criticized government corruption and also stemmed from a lack of economic opportunity. The Assad regime responded with brutal attacks, using barrel bombs that have been banned by the UN. The attacks have created what the U.N termed the “biggest humanitarian emergency of our era” as millions of Syrians flee their own country.

Sahloul focused the next part of her presentation on America’s role in the refugee crisis. Illinois receives 2,000 refugees per year from across the globe, and Chicago has long been one of the major destinations for resettlement. To help new Syrian families transition, the Syrian Community Network has created a mentorship training program, where volunteers help Syrian families adjust to the American environment. On top of the difficulty of resettling, many individuals might also suffer from post-traumatic stress disorder after living in war zones.

The organization provides training and aid to refugees, and also advocates on their behalf. As the refugee crisis unfolded in Europe and the Middle East last year, SCN protested for the U.S. to accept more Syrians, and invited newly resettled refugees to participate. “They got to experience American civic engagement,” Sahloul said, “because in Syria and a lot of Middle Eastern countries you don’t go to in front of the White House, it’s just not something you do.” The Obama administration eventually pledged to resettle 10,000 Syrians through fiscal year 2016. The U.S. had accepted 2,000 refugees in the previous year.

Where do Northwestern students fit in to this global crisis? After the talk, Mahdi Sahloul, a second-year student at Loyola, said that the best thing people could do was share the cause on social media to raise funds for refugees. He said he raised $3,000 from the Loyola community for a medical mission in a Jordan refugee camp.

“I can be a personal witness that there were 5,000 patients treated on this mission I was a part of and it was because we had so many medical supplies and antibiotics,” Sahloul said.

Still, Kudaimi reiterated that thought that in the larger conversation, people focused too much on refugees and the problems Europe faces, avoiding the root cause of the crisis. He said people only started talking about refugees after they entered Europe and that people freaked out over small crimes committed by an individual Syrian in Germany.

“All of this is centered about eurocentric thing where it’s their refugee crisis and ignoring the root of the problem which is Syria and the conflict that started in 2011,” Kudaimi said.