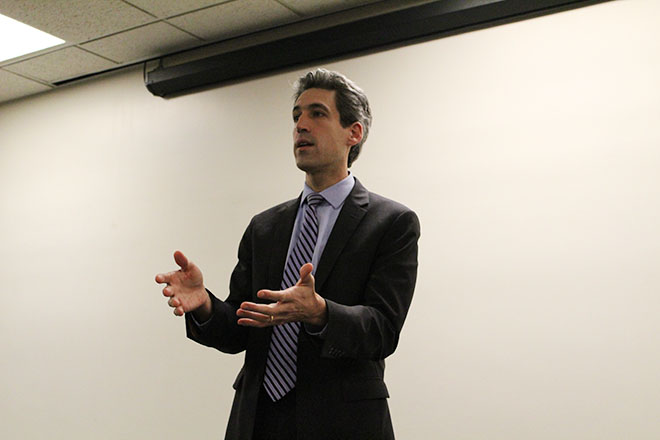 “The question is, do we want an election, or do we want an auction?” state senator Daniel Biss said at a town hall hosted by College Democrats and NU Political Union at Norris on Monday evening.

Daniel Biss, the representative of the 9th District in the Illinois State Senate, spoke with students and members of the Evanston community about his Illinois gubernatorial campaign, the importance of activism and his progressive policies as part of the hourlong event.

Biss has also served as the former Illinois House representative of the 17th District.

The conversation at Northwestern covered a broad range of topics, from funding for public schools to repealing the flat tax provision of the tax code.

Biss started the town hall by addressing the current state of Illinois’ government.

“How do we build a government that’s based on the kind of future that we’d like to have and could have in the state of Illinois?” Biss said. “The only way to do that is to build a movement of people that is powerful enough to withstand the forces that brought us to this movement.”

He also discussed his approach to Illinois’ fiscal policies.

“There’s a lot of fiscal problems, and it’s time to stop pretending that the attitudes, approaches and structures that got us to this moment are going to get us out of it,” Biss said. “We need someone willing to be genuinely critical with that long term history and genuinely willing to ask people who have gotten away with murder for a long time to finally pay their share.”

Biss further weighed in on the connection between various issues of racism, sexism and privilege in light of recent news regarding sexual harassment and assault.

“If we respond to a set of scandals that have arisen around sexual harassment in the capitol building by doing anything other than acknowledging the massive institutions of racism, sexism and privilege that infuses every single corner of American society, if we pretend that there’s some sort of iron-clad wall that separates the causes of sexual harassment from the causes of gender and pay discrimination, from the causes of a situation where women are promoted in workplaces less frequently, from the causes of a situation where no democratic candidate for governor is a woman, but in this moment of all moments, with Donald Trump as the president and a women’s protest movement changing the world, you’ve got a whole bunch of unbearable dudes running for governor on the democratic side. That’s not a coincidence.”

Alexander Vasconcelles, a Weinberg senior and organizing fellow at Biss for Illinois, spoke about the importance of student engagement in local politics.

“It’s important for students to be aware of what’s going on and the issues the community is facing,” Vasconcelles said.

Tom Elliott, Communications Director of Biss for Illinois, spoke to the campaign’s momentum.

“Yesterday, we had over 160 people come out to pass petitions to get Daniel Biss on the ballot. It was raining and cold, and yet, we still had people coming out, working to get Daniel on the ballot and talking to voters about why this election is important,” Elliott said. “I would ask you to see whether any other campaign has that kind of energy and momentum.”