Catching up with former lacrosse star Taylor Thornton
By Shannon Lane
7:39 p.m. May 15 2014

Just one short year ago, Taylor Thornton was lining up on the draw circle at the start of every Northwestern lacrosse game. A top recruit out of The Hockaday School in Dallas, Texas, Taylor Thornton certainly left her mark on the lacrosse program, earning recognition as the 2011 IWLCA National Defender of the Year, 2012 Lacrosse Honda Sports Award winner and a 2013 nominee for SI.com's Female Athlete of the Year.

Now she's switched to the other sideline, reporting on sporting events - even lacrosse games - for her graduate program in Medill. This Saturday, her former teammates will face Florida, the proverbial monkey on Northwestern's back, in Gainesville, and it's not going to be an easy one. But now, Thornton can only stand and cheer for her friends and coaches, focusing instead on her journalism career and a little bit of R&R.

How has your Northwestern experience post-lacrosse been different? What do you miss most about playing?

I’d say my experience has been great. It’s been really nice to focus on school and have some time for myself. I thought I would have some more free time but Medill keeps you busy.

What is it like being on the other side of the camera, covering events like lacrosse games?

Have you found that your experience on the field helps your ability to cover sporting events?

For sure. I feel I’ve been there; I have the mindset of an athlete. It’s a little more natural for me. I have a really strong sports background; it comes pretty easy for me. I think I have a leg up in that respect for sure.

What is it like having to watch games from the sidelines while your former teammates are competing?

It’s fun. It’s kind of nerve-wracking. I’m like, “I remember being in that moment in that kind of pressure.” It’s fun; I’m cheering on my friends, so it’s been okay. 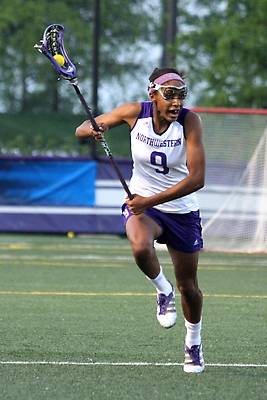 What is different about the team this year, now that you’re watching from the outside?

I think what’s really different about this team this year, I would say [that] each game they have to play as a team and everyone has to step up to the plate every game. We don’t have those one or two go-to people. All the attack has to be working together. The defense has to be communicating all the time. It has to be a collective team effort to win the game.

Have you given any advice to the players? What advice would you give them if you haven’t?

My thing this year is to stay out of it. I didn’t want them to think I was putting my two cents in. I’m here to support and cheer them in but I’m not trying to be in it. At this point, they have Florida coming up this weekend. It’s possibly the seniors’ last game; it’s a matter of, are you going to show up? They don’t have the position of being a top one or two team. The lacrosse community has been waiting for this. You don’t have the pressure. At this point, what do you really have to lose?

What are your plans after finishing grad school? Are you still playing lacrosse anywhere in your free time?

Lacrosse will probably always be a part of me, for sure. I think I’ll probably move away from it. I’m ready to move on to a next chapter in my life. Professionally, career-wise, I don’t think it will really be with me that much. I’m looking to pursue something [in broadcast]. Sometimes, I just wish I had given myself some time to breathe. I want to take some time to travel; I always wanted to study abroad and I never got the opportunity to.