Students and protesters from Northwestern as well as greater Illinois swarmed the plaza by the Arch today, seizing the timing of the President Obama’s speech to advocate for a variety of hot-button issues.

The demonstrators blurred party and generational lines. College students and young adults from Chicago called for Obama to stop deporting undocumented immigrants. An elderly Evanston couple joined a 17-year-old high school student in demanding the President halt the bombings in Syria. Several advocacy were reacting angrily to what they said was a struggling economy big government overreach. 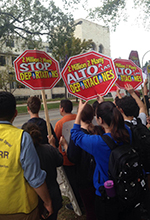 Northwestern students were particularly invested in the immigration protests, which had personal resonance for many.

“I’m a student of color, so that means that automatically I’m put in positions where I have to stand up for myself and make sure that my identity isn’t stepped on, especially on a campus like Northwestern” said Weinberg junior Cinthya Rodriguez, an activist for the Illinois Coalition for Immigrant and Refugee Rights (ICIRR), "so having to do this work is important for me to be able to just survive.”

Rodriguez directed her protests at the University as well as Obama.

“Undocumented students aren’t supported,” she said, "so there’s no presence of students who are coming out as undocumented on campus, and that’s because Northwestern makes it so hard to do so.”

Armed with “Big Government Sucks” stickers and posters mocking Obama’s iconic “Yes We Can” campaign from 2008, 19-year-old Marko Sukovich made the three hour trek from his University of Illinois campus to protest the president’s handling of the economy.

“We have an $18 trillion national debt, one of the worst job markets in the country here in Illinois…. It’s frustrating for a lot of people” he said, pinning the blame on high corporate taxes. “There needs to be a check on the expansion of the federal government.”

David From, the Illinois State Director for Americans for Prosperity, a right-wing advocacy group that the Washington Post once called the “third-largest political party in the United States,” also made an appearance. He echoed Sukovich’s message, but extended it to issues of healthcare and the environment.

“[Obama] needs to embrace greater energy production, and unleash the natural resources that we have, including improving the Keystone pipeline,” From said. “We need to scale back the mandates in Obamacare so that you cannot add that burden to small businesses and do away with some of the excessive EPA regulation.“

From welcomed the opportunity by the president’s speech.

Standing beneath a sign with black and white photos, stylized as mugshots, of Obama and George W. Bush, paralegal Jay Becker called the President a “war criminal,” and said that he should not be allowed to speak at the University. Citing the high numbers of civilian casualties and refugees that resulted from the Iraq War, she said the U.S. should cease all involvement in the Middle East.

Students were generally excited for the president’s speech, but overall receptivity to the protests was mixed.

“Oh, today I met quite a few Northwestern libertarians on campus,” said Jonathan Jackson, 27, an activist for Young Americans for Liberty. “They’re all really excited about helping advocate and educate other students about a lot of libertarian issues.”

Still, other Northwestern students, even those who agreed with the demonstrators’ views, questioned whether the protests were appropriate for President's first appearance at Northwestern since his 2006 commencement speech.

“As a proponent of immigration reform I definitely identify with [ICIRR],” SESP freshman Kevin Corkran said. “It’s important to be politically active and to protest, and it’s your constitutional right to do that. But is this the right place? Maybe not.”