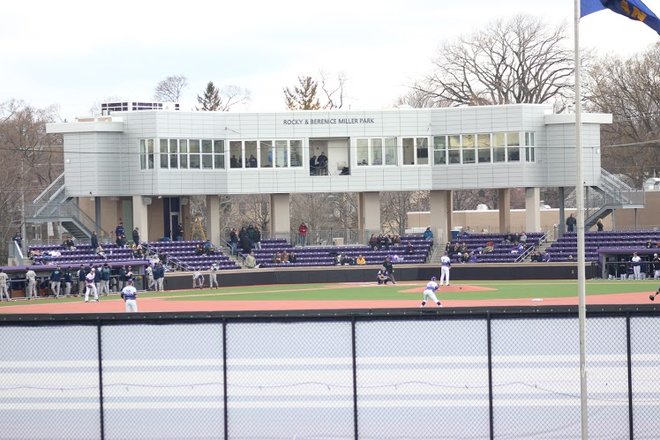 The new and improved Rocky and Berenice Miller Park had its grand-opening ceremony Sunday.

Northwestern (7-21, 1-5 B1G) started its first conference game at the new and improved Rocky and Berenice Miller Park with a bang.

Outfielder Matt Hopfner crushed a home run to leftfield in the bottom of the first to give the 'Cats a 1-0 lead in the first game of a doubleheader on Friday afternoon, but that was all NU could hang its hat on in Game One, as No. 20 Michigan (20-5, 3-0 B1G) took a lead they wouldn’t relinquish in the third on their way to a 10-4 win. Michigan scored eight in the third, fourth and fifth innings combined to put the game away relatively early.

Northwestern got one back in the fourth and two back in the seventh, but that’s all the ‘Cats could muster off Michigan starter Oliver Jaskie, who got the win and went 6 ⅓ innings, allowing four runs and striking out five. NU starter Reed Mason took the loss and went just three innings, giving up six runs, five of which were earned, on six hits.

Game Two on Friday was the Matt Ramsay show. The Michigan outfielder entered the series with no home runs on the year, but hit not one, not two, but three two-run shots – all of which were absolutely crushed. He finished with a total of seven runs batted in for the game, and his four hits were just a fifth of the Wolverine’s 21-hit onslaught.

But as good as Ramsay was, he was perhaps outdone by Michigan starter Brett Adcock, who mowed the ‘Cats down over six innings pitched, allowing just one hit (which didn’t come until the sixth inning) and holding them scoreless.

NU’s only knock off the crafty left-hander came in the sixth inning. JR Reimer cranked a two-run shot to left in the eighth, his first of the year, and the ‘Cats scratched one across in the ninth, but it was too little too late. NU fell 12-3, mustering just two hits in the second contest.

“Hitting is contagious,” head coach Spencer Allen said after the first two games. “They got a couple balls up in the wind...we’ve gone on rolls like that offensively, but bottom line, we were just up in the zone...we just have to make better quality pitches to get good hitters out.”

The Michigan pitchers baffled Northwestern Friday, and Allen admitted that the Wolverines had them beat.

“Those two arms are some of the best,” Allen said. “Jaskie has a really good change-up. He’s vastly improved. That’s the best change-up we’ll see...and Adcock, that’s a draft arm. It’s up to 92, it’s left-handed. Those aren’t excuses, we have to be better. But it’s a momentum thing. They had it going today and we just have to be better.”

The Wildcat bats woke up in Game Three on Sunday afternoon, but Michigan edged NU 11-9, completing the series sweep.

Powered by shortstop Jack Dunn’s grand slam in the third inning, the ‘Cats were able to jump out to a 8-6 lead. But the Wolverines would score three to take a 9-8 lead in the fourth inning, keeping the lead the rest of the game.

Dunn led the team with three hits and five RBIs, hitting his first home run of the year. Hopfner was tagged for six hits and six earned runs in just two innings on the mound.

Next up, Northwestern will host UIC on Tuesday at 3 p.m.