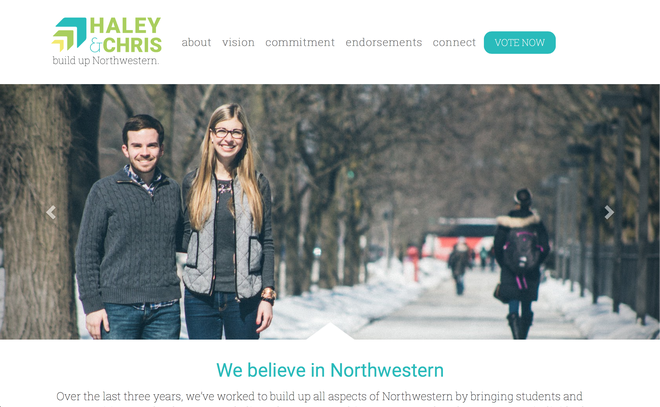 A website, JoinHaleyandChris.com, was one of many expenses for Haley Hinkle's and Chris Harlow's 2015 campaign

At the Democratic presidential debate last Thursday, Bernie Sanders was asked about an all-but-forgotten feature of American elections: the presidential public financing system, in which the federal government will help fund presidential campaigns under certain circumstances. Although no winning presidential candidate has used it since Bill Clinton in 1996, a parallel system is alive and well at Northwestern, cemented with this year’s new ASG campaign finance laws.

“Northwestern is the only school with such a strict limit,” said SESP senior Chris Harlow, the executive vice presidential runner up in last year’s ASG election. “It makes elections much more accessible, and it means the campaign is much more about content than flashiness.”

He compared Northwestern’s system to other Big Ten schools, where he said campaigns receive thousands of dollars from donors and student groups, and elections can last months. Northwestern’s campaign lasts nine days and students spend less than $200, but that doesn’t mean there aren’t money problems.

As of last year, candidates are allowed to spend up to $174, the annual student activity fee, for which ASG reimburses them. Harlow said student leaders at the University of Nebraska told him they would spend over $4,000 for a campaign.

Before last year’s election, spending was still capped at the student activity fee, but candidate had to shell out the money themselves, or receive funds from individual donors.

“Really it was probably just the students themselves,” Weinberg junior Lauren Thomas, head of the ASG election commission, said.

Julia Watson and Erik Zorn, the 2014-2015 president and executive vice president, proposed public funding as a way to make ASG more accessible for those who couldn’t afford it or weren’t already involved, Thomas said. ASG funded last year’s election, but the rules were only officially incorporated in the guidelines for 2016.

They’re stingy about how candidates use it, though. They can’t tape the flyers to the ground and they are explicitly banned from writing on the tape and using it as a “campaign material.”

They’re restricted on how they can spend the money, as well. Purchases can’t include additional paper and everything they purchase must be from a store in Evanston, unless they have some legitimate reason.

That left Harlow with $174 to spend on buttons, rope, a bed sheet with their names to hang at the Arch, a domain name and printing. ASG supplies a website on their server and $24 printing credit, but Harlow said candidates often prefer a personal server and need to print more pages.

Harlow, though, said the unofficial costs of a campaign were greater than what ASG provided.

Harlow said he and his running mate, Hayley Hinkle, racked up expenses on bonding experiences and thank-you gifts for their team, including trips to Lincoln Park for karaoke, thank you cards and picture frames with the campaign members. In total, Harlow estimated they spent around $400 in extra costs.

“[We would] buy pizza for our campaign team because it’s 1:00 am and they’ve all been sitting working tirelessly for us for 12 hours,” Harlow said.

And when it came time for ASG to reimburse them the $174, Harlow said they were late.

The campaign was in April. Harlow said he was reimbursed in the fall, meaning he was out $200 for months. Although this was a single failure and an exception, Harlow said the entire system needs to be rethought. He said it would be better to give students money in advance and then check receipts.

“It is an undue burden on students to put up all of that money and wait four to six weeks to be reimbursed,” Harlow said.

Nothing is currently in the works to resolve this issue, Thomas said, but the commission could consider giving students ASG credit cards with fixed amounts in advance.

For some, this isn’t a problem. Thomas said she never spent a cent on her campaign freshman year, preferring to reach out to students in person. Besides, she said, ASG only allows candidates to post flyers where they are accessible to everyone.

But Harlow said he spent $15 on flyers freshman year to win a competitive race for senator in Elder. He suggested ASG make funds available to students who can’t take on that cost.

“ASG should be considerate and cognizant that people who want to take on leadership positions come from all different backgrounds, experiences and socioeconomic status,” Harlow said.

ASG and its election commission have not discussed funding for senatorial campaigns, Thomas said, and even though off-campus senators are elected in the spring, the budget has been set and they can’t make changes until they set the budget for next fall’s elections.